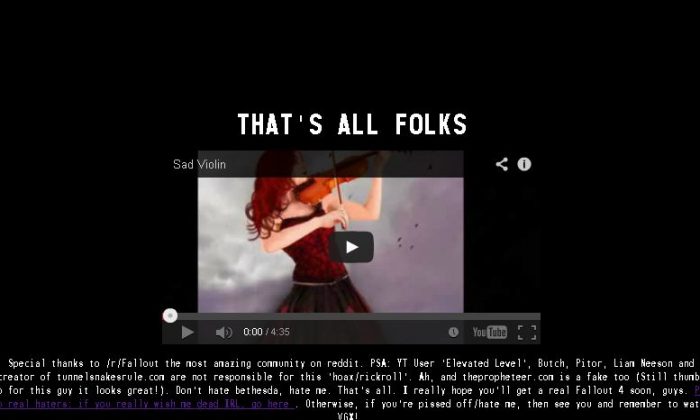 The Survivor 2299 website turned out to be a hoax.
Tech

The Survivor 2299 website, survivor2299.com, that many believed was a teaser for Fallout 4 is actually an elaborate hoax.

The website posted an update, saying “THAT’S ALL FOLKS” with a YouTube video of a sad violin.

“Special thanks to /r/Fallout the most amazing community on reddit,” it reads.

It continues: “PSA: YT User ‘Elevated Level’, Butch, Pitor, Liam Neeson and creator of tunnelsnakesrule.com are not responsible for this ‘hoax/rickroll’. Ah, and thepropheteer.com is a fake too (Still thumbs up for this guy it looks great!). Don’t hate bethesda, hate me. That’s all. I really hope you’ll get a real Fallout 4 soon, guys. PPS To real haters: if you really wish me dead IRL, go here . Otherwise, if you’re pissed off/hate me, then see you and remember to watch VGX!.”

The website continually posted morse code updates and had an official-looking Vault-Tec logo at the bottom.

A number of users on the Fallout sub-Reddit deciphered the code, which contained cryptic references to the game.

Bethesda, via Twitter, wrote on Friday evening: “If you don’t hear it through an official channel like this, assume all rumors and speculation are false.”

It is unclear who the person behind the hoax is.

Inc Gamers reported it got messages from a fan who had conversations with the person who was in charge of the Survivor 2299, saying he was “bored” with running a Fallout Facebook page, and so he created the Survivor hoax.

According to a Reddit timeline, a user discovered the Survivor 2299 website in mid-November, and it originally broadcasted morse code that translated to an end date of Dec. 11, 2013. Later, a EU trademark was discovered, but that turned out to be a fake, reported Inc Games.

Late last month, the “nuclear winter is coming” clock ticked down and the site posted a punch of extra codes.

And over the past few days, the site posted ciphers and morse about “The Institue” as well as other bits and pieces.

Bethesda and ZeniMax have not issued any statements or confirmed the existence of a Fallout 4 in the works.