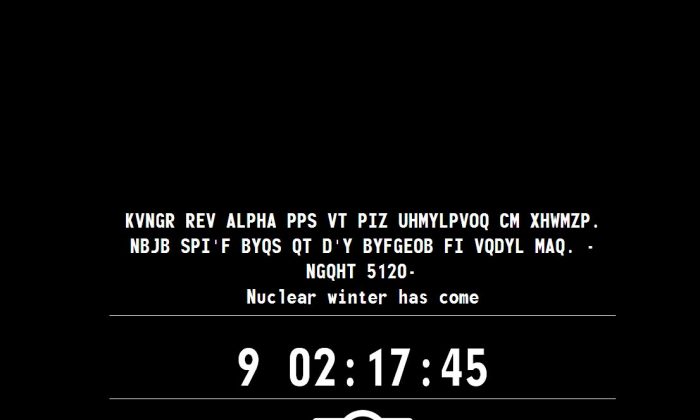 (Screenshot of the Survivor 2299 site)
Tech

The Survivor 2299 website, which some believe is a viral marketing campaign to promote the yet-to-be announced Fallout 4, posted new coded messages over the weekend.

The website had a countdown saying that something would happen over the weekend, but there wasn’t anything except for new garbled code, leading a few websites to say the whole thing is a hoax.

On the sub-Reddit /r/Fallout, users decoded the message, which reads: “THE INSTITUTE IS SEALED. THEY WON’T HELP US I’M HEADING TO BLACK ROW. -TBNLS 5120-”

“The Institute” is apparently in reference to an entity mentioned in the Fallout 3 games. Dr. Zimmer, a Fallout 3 NPC, talks about “the sealed environment of the Institute,” according to the Escapist. However, the meaning or context isn’t clear.

The “Overseer” or “Vault Overseer” has been mentioned since as far back as the first Fallout game in 1997. In the original game, the Overseer asks the Vault Dweller to scour the outside wasteland of Southern California to find a water chip replacement.

The Survivor 2299 site also includes the Vault-Tec logo at the bottom of the page.

Even though the website adds an interesting twist to the Fallout franchise, it’s unclear if it’s even real.

Kotaku.com, in an article last week, outlined a few points that suggest the whole thing is fake. Some of the reasons are that the site counted down to the wrong date for the Spike video game award show later this month, software publisher Bethesda hasn’t said anything, and it noted inconsistencies between the Survivor 2299 website and other websites that have been registered by Bethesda.

“The server is configured differently, the domain names were registered through GoDaddy instead of ZeniMax’s usual service, Corporate Domains Inc, and a reverse lookup on the IP leads you to a company in Poland, oddly enough,” it reads. ZeniMax is the owner of Bethesda.