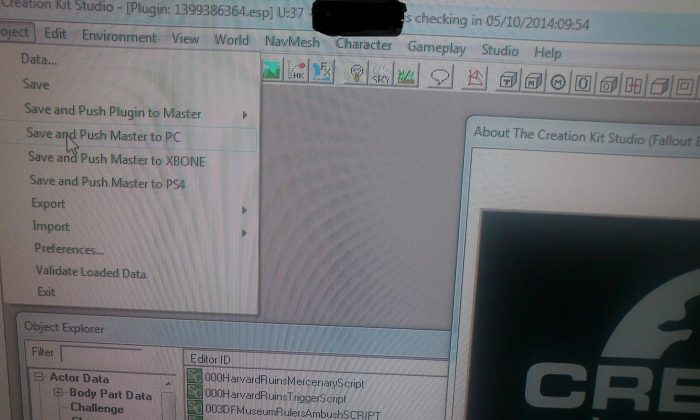 “Fallout 4” has yet to be confirmed by Bethesda or ZeniMax but a report says that an alleged development photo of the game may have been leaked. (YouTube screenshot of MrMattyPlays video)
Gaming

Fallout 4: Was a Development Photo Leaked? But No Sign of Bethesda Confirmation or Release Date

“Fallout 4” has yet to be confirmed by Bethesda or ZeniMax, but a video post says that an alleged development photo of the game may have been leaked.

The photo was taken from a computer screen inside Bethesda’s offices, according to YouTube uploader MrMattyPlays this week.

“This is a leaked photo that did appear on a Fallout Wiki website. It was sent to me by a subscriber,” he said. “Apparently … a leaked photo of what is ‘Fallout 4’ in development has come out,” he added.

He said that on the top left, there’s a “Creation Kit Studio” and there’s a blacked out area which could be the worker’s name. It says the worker “check[ed] in.”

On the top drop-down menu, it says to PC, to Xbox One, to PS4, and to master. “I’m guessing … that this is a next-gen-only title,” MattyPlays says.

There’s been rumors that the game will be set in Boston and in Massachusetts. A leaked casting document from Kotaku a few months ago for a new “Fallout” game indicated that it was.

“This is really interesting; truck crashes. It kind of reminds me a lot of the Survivor 2299 … how it started off with this big commotion,” he says. “It’s crazy and it’s blowing my mind. I can’t take this any more.”

The screenshot also shows the Creation Kit software and Bethesda Softworks LCC, the game maker. It says 2014, indicating that the alleged photo is up to date.

Kotaku in December said that it got documents from a project codenamed the “Institute,” which might refer to the entity in Fallout 3. The documents include some lines that characters will say, including the iconic “War. War never changes” bit. It appears the main character will say the line rather than voice actor Ron Perlman.

“ The casting documents, which I’ve been able to confirm are real, include scripts, character descriptions, and other details about the next Fallout, and although the word Fallout does not appear in these scripts, there are several references to Fallout’s setting and locations,” writes Kotaku’s Jason Schreier.