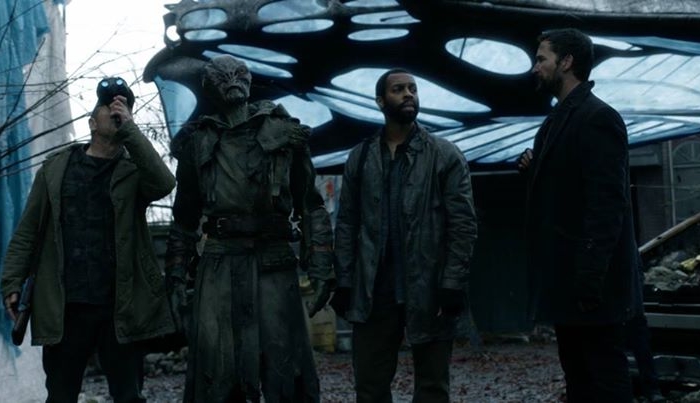 Falling Skies has been renewed for a season 5 and fans are wondering what’s in store.

Season 4 wraps up with back-to-back episodes on August 31, which will lead into the final season.

Season 5 will, as usual (though season 4 was extended a bit), have 10 episodes.

Season 5 will premiere sometime next summer, likely in June.

CarterMatt points out that the plot entering next season will probably be filled with hope.

“In terms of broad strokes, what we do anticipate from the final season starts and ends with one word: Hope. While we’ve seen our fair share of shows with sad endings as of late (from Breaking Bad to Dexter to even How I Met Your Mother, mostly in that it wasn’t any good), we cannot imagine that this will be one of them and leave anyone satisfied. After all, what would be the point of the past several years just to see them suffer more at the end? This is not like Walter White, where he was a terrible person for most of the run and really got what was coming to him in so many ways. Tom doesn’t deserve to be gunned down or destroyed,” it said.

“Also, we do expect some cast shake-ups (characters do die), some further information about the Espheni and other alien races, and what a potential human society could look like now that so much as changed.”

“We just finished breaking episode 5 today, and we don’t start shooting for another month or so, so we’re in really good shape … much better shape than frankly I’ve been on other sci-fi visual effects shows where you’re chasing your tail by episode three. It’s nice to plan ahead, it’s nice to be able to perfect it,” he said.

“At the same time, it’s nice to be able to make course corrections, and give yourself the flexibility to change things on the fly.”

“We’re still here, and we’ll be back for a fifth and final season. So rarely in television do you get to choose your own ending,” added Noah Wyle.

“You get to give the fans a sense of completion to the narrative that you’ve played out. Getting to wrap up these storylines and have these characters reach their natural conclusions… I think it’ll be satisfying for everybody.”

See descriptions of the last episodes of season 4 below.

Tom’s mission to destroy the Espheni Power Core is complicated by Lexi’s return. Lexi is forced to take extreme measures to save her father’s life – and her own – after a Beamer malfunction. Meanwhile, the 2nd Mass fears an impending Espheni strike by the scorched Overlord. Treva Etienne guest-stars.

In the conclusion of the two-part Season 4 finale, Tom and Lexi must triumph over Tom’s mortal enemy as they desperately try to destroy the all-powerful Espheni power core. Elsewhere, the 2nd Mass faces a terrifying new Espheni bomb.