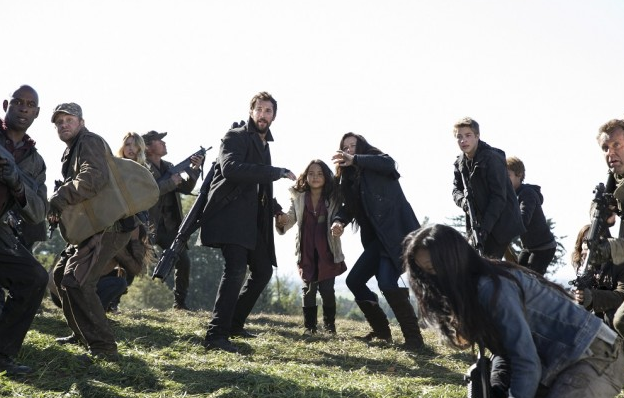 Falling Skies on TNT is set to premiere season 4 soon, on June 22.

Some new information has has been released, including photos and a trailer. One of the latest tidbits is that Pope is on the wrong end of a flamethrower when we first see him again, but a little later he’s kicking back and enjoying some Gilligan’s Island when Hal shows up asking for a favor.

“Pope’s not big on favors, especially these days, so it won’t surprise you to know that the gents soon enough end up in a bit of a scuffle,” reported TVLine. One of the trailers also shows Pope hitting Captain Weaver, a surprise to no one.

“As season 4 opens, the Mason family and the remaining 2nd Mass suddenly find themselves under brutal attack by a new Espheni war machine – and a new, deadly creation unlike anything previously encountered. Divided like chattel and spread to the winds, they must each forge new relationships in order to survive.”

The network also released the official descriptions for the first three episodes. The first episode will pick up about two weeks after the end of season 3.

On the outskirts of Charleston, just steps away from perceived safety, The Mason Clan and the remaining 2nd Mass suddenly find themselves under brutal attack by a new Espheni war machine – and a new, deadly creation unlike anything previously encountered. Divided like chattel and spread to the winds, The Masons must each forge new relationships and abilities to survive.

The Espheni reveal their new plan to Tom, and he is faced with an impossible decision. Meanwhile, Weaver and Pope investigate a way out of the Espheni prison, while Matt struggles to hide his true allegiance from the “Team Leaders” at the Espheni Youth Camp. Elsewhere, Anne leads an exhausting search for her daughter Lexi, while Ben’s concerns about Lexi’s increasing powers uncovers a devastating secret she’s been keeping. Treva Etienne and Robert Sean Leonard guest-star.

Tom and the 2nd Mass hatch an elaborate plan to escape the confines of the Espheni Ghetto. Meanwhile back in Chinatown, after learning from Ben that Lexi has been keeping a deadly secret, Maggie confronts Lexi publicly. At the Espheni Youth Camp, Matt tries to talk Mira out of a dangerous escape plan. While trekking through the woods with her guerilla fighters, Anne has a flashback to her time in the Espheni Tower with Karen (guest star Jessy Schram), where a terrifying secret about Lexi is revealed.

Some other insight into the season comes from interviews that the actors have done.

For instance, the part alien child Alexis has continued to grow up freakishly fast (now played by Scarlett Byrne).

“Well, what’s so great for me this year is that it’s a strange position for my character to be in because she’s my child, but she’s an adult now,” said Moon Bloodgood (Dr. Ann Glass) at WonderCon.

“She’s not a young girl. So, there are definitely moments when her and I go head to head. And I think, also, Ann is someone who is just going to relentlessly defend her. There’s also a lot that happens between her and Seychelle Gabriel (Loudres Delgado). I can tease that.”

“We’re friends, yeah. You know, we get separated in the beginning of this season and I end up with her,” said Gabriel. “And I think Lourdes feels a sense of protecting her because she birthed her. Both of them are coming into this new individuality together, on their own little journey.”

With Alexis’ help, as seen in the season 3 finale, Lourdes is back in her right mind.

There’s also character separation. Dr. Glass is off with Anthony and Lourdes is with Alexis and Maggie. The separation happens when the group approaches Charleston at the beginning of the season.

“We get ambushed, and you that see Noah and Will are somewhere. I am now on the road. I am looking for my daughter,” said Bloodgood.

Matt, meanwhile, gets taken to a military reform school for children while Hal is somewhere else. Tom is with Pope, alone, but he and Hal eventually reunite.