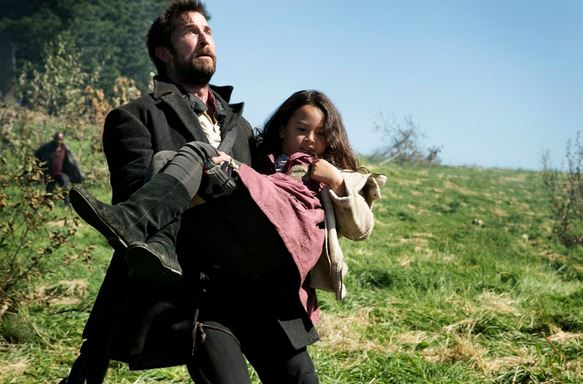 Falling Skies on TNT is back on Sunday, June 22 with season 4, episode 1.

Live streaming will be available via HBO Go.

The episode sets the course for the rest of the season.

“On the outskirts of Charleston, just steps away from perceived safety, The Mason Clan and the remaining 2nd Mass suddenly find themselves under brutal attack by a new Espheni war machine – and a new, deadly creation unlike anything previously encountered,” according to the description.

“Divided like chattel and spread to the winds, The Masons must each forge new relationships and abilities to survive.”

Some spoilers have come out, such as the fact that part-alien child Alexis has grown super fast and is now pretty old.

“Well, what’s so great for me this year is that it’s a strange position for my character to be in because she’s my child, but she’s an adult now,” said Moon Bloodgood (Dr. Ann Glass) at WonderCon.

“She’s not a young girl. So, there are definitely moments when her and I go head to head. And I think, also, Ann is someone who is just going to relentlessly defend her. There’s also a lot that happens between her and Seychelle Gabriel (Loudres Delgado). I can tease that.”

“We’re friends, yeah. You know, we get separated in the beginning of this season and I end up with her,” said Gabriel. “And I think Lourdes feels a sense of protecting her because she birthed her. Both of them are coming into this new individuality together, on their own little journey.”