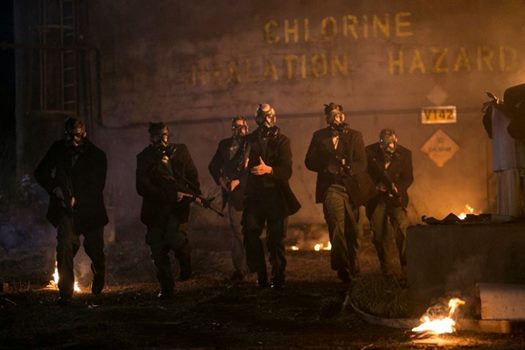 Falling Skies season 4 is nearing the end, and the finale is coming up.

Fans will be pleased to learn that it appears that the season was extended by two episodes. Episode 11, Space Oddity, is being referred to as part 1 of the season finale while episode 12, Shoot the Moon, is part 2.

So episode 9 of this season is airing on August 17; episode 10 will air on August 24. Then the season finale will air across two Sundays, August 31 and September 7. All will air as usual at 10 p.m. EDT.

Check out the descriptions for the upcoming episodes below. Also note that the show has been renewed for a 10-episode fifth and final season, but the cast is up in the air as some deaths can be expected in the final episodes of this season.

While members of the 2nd Mass attempt to dig out a shot-down Beamer, Tom and a small team follow the Volm to a supply cache in search of equipment to expedite the process. Along the way, they encounter a friend, and must decide whether or not to trust her. Back at camp, Maggie and Ben grow closer as he teaches her to hone her new skills, while Pope and Sara (guest star Mira Sorvino) continue to clash, resulting in a fight from which they may never recover.

Tom and the remnants of the 2nd Mass learn to pilot a Beamer as part of their plan to destroy the Espheni Power Core, and the group draws straws to see who will embark on the dangerous mission. The threat of death hanging over everyone triggers long-simmering confrontations between many of our main characters, ultimately bringing the 2nd Mass closer together.

Tom’s mission to destroy the Espheni Power Core is complicated by Lexi’s return. Lexi is forced to take extreme measures to save her father’s life – and her own – after a Beamer malfunction. Meanwhile, the 2nd Mass fears an impending Espheni strike by the scorched Overlord.

With the weight of humanity’s survival on Tom and Lexi’s shoulders, they must defeat Tom’s mortal enemy and find a way to destroy the omnipotent Espheni Power Core. Meanwhile, a new, terrifying Espheni Bomb is dropped onto Chinatown, immobilizing the 2nd Mass and preparing them for Human Skitterizaton.