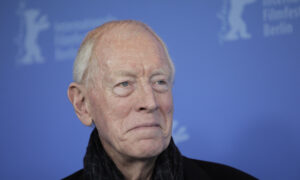 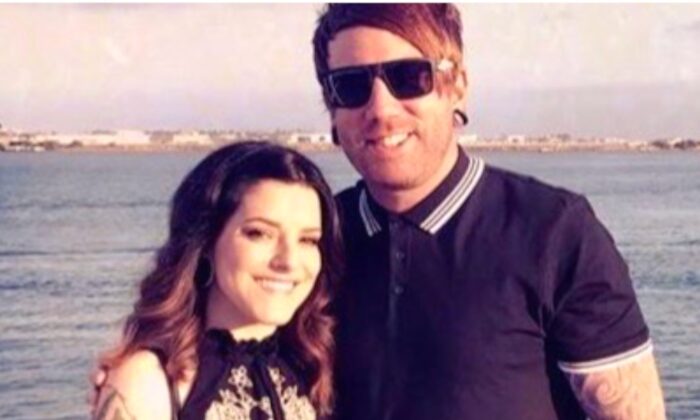 Guitarist Derek Jones (R) and his fiancé Christina Cetta, who passed away from cancer in November 2019. (GoFundMe)
Entertainment News

Guitarist Derek Jones, best known as a member of the band Falling in Reverse, has died at the age of 35.

The band’s frontman Ronnie Radke shared the news on Twitter, saying he is heartbroken by his friend’s death.

“Your spirit will be interwoven through the music I write forever,” Radke wrote. “Rest In Peace Derek Jones. My heart is broken.”

No information was given on the cause of Jones’s death.

Falling in Reverse have released four records to date. Jones was an early member of the band and played on all four of the albums, most recently 2017’s “Coming Home.”

Jones’s fiancee Christina Cetta died of cancer in November 2019. The couple set up a GoFundMe page at the time that collected over $45,000.

Jones said on the page that Cetta had been diagnosed with metastatic cancer, and it had spread to her lymph nodes. She had been treated for cervical cancer three years ago, but her cancer returned in March 2019.

“I hate to come on here with bad news, but conventional cancer treatment has failed me. Everything has gotten worse sadly,” Cetta wrote on Instagram at the time. “I’m seeking alternative treatment out of the country which isn’t cheap!”

Hey everyone! I hate to come on here with bad news, but conventional cancer treatment has failed me. Everything has gotten worse sadly. If you can please share the link in my profile. I’m seeking alternative treatment out of the country which isn’t cheap! I’m hoping this will be the thing that actually does something for me rather than making it all worse???? it’s been a bumpy hellish ride and I’m praying for some healing. If you can’t donate, please share!! Thank you and love you all!❤️

Jones said at the time it was killing him to see his fiancee going through it again.

“It kills me to see her go through this again, especially since now we’ll have to go through the grueling treatment that comes along with this battle,” Jones said of Cetta’s treatment. “She is my life and the best thing to ever happen to me. We’ve been together 10 years and I’m looking forward to 100 more together.”

Many fans paid tribute to Jones on social media, and sent comforting words to the band’s frontman, Radke.

“My heart is so broken. I’m sorry for your loss,” one fan commented on Radke’s tweet. “I’m so honored to have met him, he was such a nice and great guy.”

“No words said can numb the heartbreak, but we love you brother and sending tons of prayers and full hearts your way,” one comment read.

“Rest in paradise Derek, you’re now with your love, this breaks so many hearts but we love you and you’ll never be forgotten,” one fan wrote on Twitter.