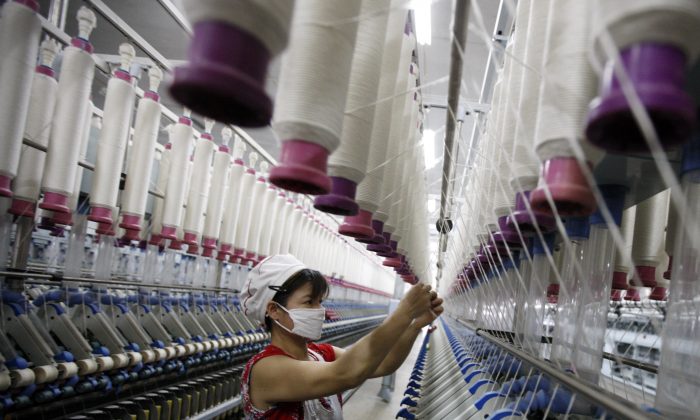 A worker in a textile factory in Huaibei, in north China's Anhui province on July 24, 2013. (STR/AFP/Getty Images)
Business & Economy

When China reported another month of foreign exchange outflows Dec. 7, analysts were hoping trade numbers on Dec. 8 would be the saving grace. They were not.

The drop in activity brought down the trade surplus to $53.5 billion. All three numbers came in below market expectations.

If China has a trade surplus, it means foreign exchange is flowing into the country to counteract outflows of capital.

If trade slows down further, the pressure on foreign exchange reserves and the currency will only get worse.

“A lower trade surplus is one of the drivers of the fall in foreign exchange reserves. … All else being equal, this combination of trade data tends to put more pressures on the yuan to depreciate,” Goldman Sachs writes in a note.

Many analysts speculate that a weaker Chinese currency could bolster exports.

“The yuan is the only major currency that is overvalued, and Beijing is the only one that has not engaged in the currency war,” says Diana Choyleva, chief economist at Lombard Street Research.

Investment bank Macqurie, however, doesn’t think it will help much, because most of its competitors have devalued already. “It’s hard for China to use devaluation to grab more market share. It also means that China has to rely mainly on domestic demand to bolster growth,” it states in a note to clients.

However, sometimes bad news is good news, according to research firm Capital Economics.

“The sharp fall in commodity prices at the end of 2014 along with the weakness in exports at the start of this year will soon provide a much more flattering base for comparison,” it states in a note. In other words, bad data from the past will make for good data in the future.