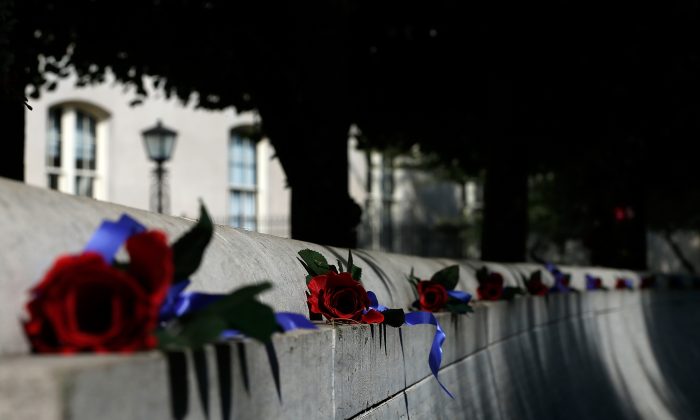 A line of red roses above the National Law Enforcement Memorial on the 13th anniversary of the 9/11 attacks, in Washington, D.C., on on Sept. 11, 2014. 72 law enforcement officers died in the line of duty on Sept. 11, 2001, more than on any other day in American history. (Win McNamee/Getty Images)
News

On Wednesday, July 29, 2015, I was honored to conduct a leadership presentation for the Port Authority Police Department (PAPD).

Prior to my presentation, I reflected on the heroic sacrifices of this distinguished agency during the Sept. 11, 2001, attacks.

On that fateful day, a hijacked airliner struck One World Trade Center at 8:46 a.m., igniting a blazing inferno on the side of the 110-story structure.

There is no end in sight to the challenges police officers face as they serve America during a time of continuous violence and dangers.

Seventeen minutes later, another hijacked jet slammed into Two World Trade Center causing a second inferno that would forever change the course of security in America.

The PAPD, which was the first law enforcement to respond to the terror attacks, quickly rushed into the burning buildings and heroically rescued thousands of people.

Some of these officers climbed high into the heart of the chaos to assist people seriously injured, trapped, or unable to escape.

Thirty-seven of these valiant officers were killed on 9/11, along with so many other heroic first responders and colleagues from the NYPD, FDNY, and the New York State Courts.

These heroes, who offered the ultimate sacrifice must be eternally appreciated.

The tragedy of the ultimate sacrifice has continued since 9/11.

There is no end in sight to the challenges police officers face as they serve America during a time of continuous violence and dangers.

Attacks against police officers throughout the nation, under various circumstances, have already led to 19 senseless deaths this year.

A recent killing was Officer Sean Bolton, 33, an Iraq veteran, shot multiple times on the night of Saturday, Aug. 1, during a traffic stop in Memphis, Tennessee.

Officer Bolton was killed over an altercation over two grams of marijuana, nothing more than a misdemeanor citation and fine.

Aside from Officer Bolton, there have already been 19 officers violently killed by suspects in 2015.

There are other dangers—including traffic accidents for example—raising the fatalities this year to 64 according to the National Law Enforcement Officers Memorial Fund.

All who have offered the ultimate sacrifice deserve our heartfelt prayers.

Our country would immediately experience chaos, anarchy, and disorder without the vigilance, dedication, and sacrifices of police officers.

Here are just a few of other fallen officers who died at the hands of violent suspects in 2015.

America must always be grateful for our police officers as they are the lifeline of security for our communities.

We must be mindful that police officers are also community and beloved members of families.

We must also always have compassion, empathy, and sensitivity for their families as well.

Carved on the sacred walls of the National Law Officers Memorial in Washington, D.C., are the names of over 20,000 federal, state, and local law enforcement officers, dating back to the first know fatality in 1791.

Each of these heroes who made the ultimate sacrifice protecting our country deserves respect.

Aside from being carved names on stone, may each of these brave souls have their names eternally engraved in our hearts as they represent the courage, character, and decency of America.