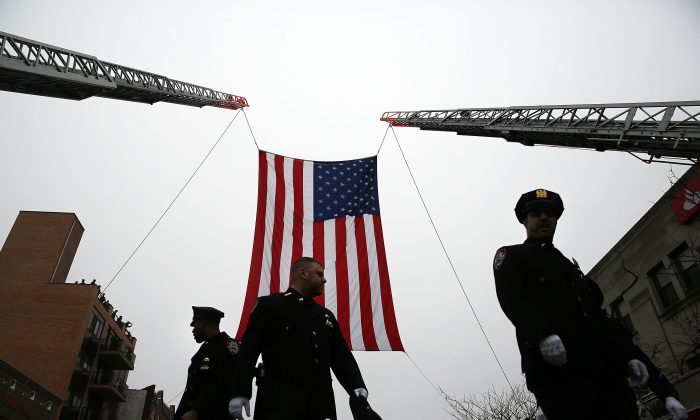 Police officers from around the country attend the funeral of slain New York City Police Officer Wenjian Liu, one of two officers murdered while sitting in their patrol car in an ambush in Brooklyn last month on January 4, 2015 in New York City. (Spencer Platt/Getty Images)
Opinion

America is the land of the free and home of the brave.

This is only possible because of those who serve and protect our cherished way of life.

Service for America includes those making sacrifices in our armed forces, and all law enforcement officials protecting our communities.

America must appreciate all of them, as well as the sacrifices of their families and communities.

We must be fully dedicated to renewing our nation, and preventing the unleashed violence must be our priority.

The antidote to this violence in our communities requires compassion, vigilance, and character.

According to statistics documented on the National Law Enforcement Officers Memorial Fund (NLEOMF), these are indisputably perilous times for law enforcement.

As of Nov. 28, the preliminary 2016 law enforcement officer fatalities have a 61 percent increase of firearms related fatalities.

This sobering statistic is not only a challenge to law enforcement throughout America, but a grave concern to their families.  It must also be a concern to all of us.

Our law enforcement communities are the ethical sentinels of civilized society, separating us from chaos, anarchy, and turmoil.

America must appreciate the service of all who protect and serve and stand united with them.

The dangers faced by law enforcement are exacerbated by the devastating spike in ambush-style attacks against them.

This year, one-third of law enforcement officers shot to death on the job, were purposely targeted by their killers, according to the NLEOMF.

Statistics can become sterile, cold, and impersonal if we fail to remember that they represent Americans who have grieving families, friends, colleagues, and communities.

Here are just a few fallen law enforcement heroes from 2016, whose dedication to protect and serve represents the best of all of us:

Police Officer Collin James Rose – a member of the Wayne State University Police Department. Officer Rose was shot and killed on Nov. 23. while detaining a suspicious individual.  He was the 61st officer killed in the line of duty in 2016 and he seventh of the year for the state of Michigan.

Detective Benjamin Marconi–a member of the San Antonio (TX) Police Department. Detective Marconi was shot and killed on Nov. 20 while conducting a traffic stop.  He was the 60th  law enforcement officer to be shot and killed this year and the 18th officer fatality for the year in the state of Texas.

Deputy Commander Patrick Carothers–a member of the U.S. Marshalls Service.  Deputy Commander Carothers was shot and killed on Nov. 18 while attempting to serve a warrant in Long County, Georgia.

Deputy Sheriff Dennis Wallace–a member of the Stanislaus County (CA) Sheriff’s Department. Deputy Sheriff Wallace was shot and killed while responding to a call about a suspicious car and person.

Police Officer Scott Bashioum–a member of the Canonsburg Borough (PA) Police Department. Officer Bashioum was shot and killed in an ambush attack while responding to a domestic disturbance.

Sergeant Paul Tuozzolo–a member of the New York Police Department (NYPD).  Sergeant Tuzzolo was shot and killed on Nov. 4 while responding to a robbery call.  He was the third officer shot and killed in the state of New York in 2016.

These officers, along with all the fallen, and all of their families, deserve our unwavering compassion, respect, and prayers.  They are not only those dedicated to protect and serve, but members of our families and communities.

After the Columbine High School tragedy, I conducted presentations throughout America to prevent school, campus, and university violence.

During these presentations, I addressed the culture of violence taking place nationwide.  It was my concern, shared with many audiences, that incidents of violence would not only increase, but America would lose its outrage.

The tragedy being witnessed in America is that school, campus, and university incidents are indeed becoming the norm.  Parenthetically, a tragedy is unfolding at Ohio State University as I write this article.

This reprehensible violence, is now compounded with the senseless killing of our police officers, which is also tragically becoming the norm.

This is a sobering commentary of violence in America, and the violence must end.

Only when America realizes that law enforcement is critical to the safety and security of our communities, will we be on the path to reawakening the nation.

Vincent J. Bove, CPP, is a national speaker and author on issues critical to America. Bove is a recipient f the FBI Director’s Community Leadership Award for combating crime and violence and is a former confidant of the New York Yankees. His newest book is “Listen To Their Cries.” For more information, see www.vincentbove.como