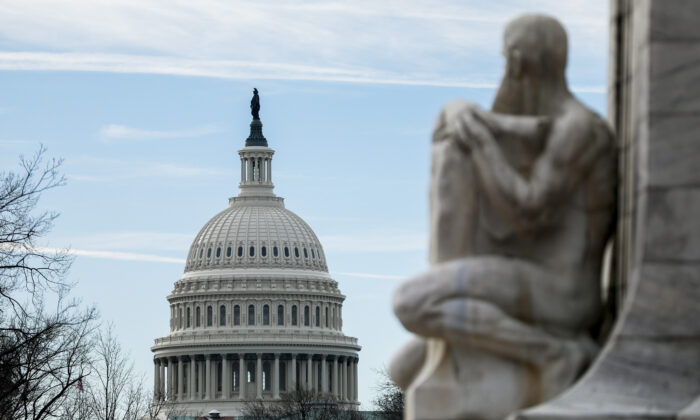 As the Democrats try to sort out the hash they made of the Iowa caucuses—similar to the impeachment of President Donald Trump, a political mess entirely of their own making—a larger question looms over the fall election: Will the United States remain a republic, or will it molt into a plebiscitary “democracy”?

In the teeth of a constant battering from the left that seeks to call nearly every aspect of the American system of governance into question, the real question to be decided this fall is not Trump versus the Democrats’ Your Name Here. Rather, it’s about the Constitution versus an entirely different political structure that may still go under the name of the United States of America, but, in fact, would be an entirely different country, bearing no more resemblance to the America of the Founders than modern Rome does to the Roman Republic.

None of these pressing political issues, including Trump’s evanescent impeachment, the critical function of the Electoral College, the proper role of the Senate, and the chaotic but yet somehow always predictable way in which one of the major parties insists on choosing its standard-bearer, is occurring in a vacuum.

From the so-called Progressive Era of Teddy Roosevelt, William Howard Taft, and Woodrow Wilson—an era that brought us the income tax, the direct election of senators, and Prohibition, as well as female suffrage, in the form of constitutional amendments—presidents of both parties have gradually steered the country away from its founding principles and toward a more “democratic” nation that, curiously, has served only to increase the power of an elite class in Washington.

Two world wars hastened the concentration of power in the federal District of Columbia, and by the time the United States emerged victorious in 1945, the notion that America ought to be ruled directly from Washington, and the political distinctions among the states should be minimized as much as possible, had become widely accepted.

The contradictory result has been an increasingly fractious country, more so than any time since the 1848–1861 run-up to the Civil War. This time, however, the rupture turns not on the issue of slavery but on personal and national sovereignty.

The failed Trump impeachment has brought all this into focus, as the left has turned its rage from the Electoral College—which gave Trump his 2016 victory over Hillary Clinton, despite his loss of the overall popular vote—to the Senate itself. It infuriates the progressives that Wyoming, with only three electoral votes (the minimum), has the same number of senators as mighty California, with 55 electors.

That, however, is a feature, not a bug. The 13 British colonies that broke away from the mother country in the late 18th century and united to form a republic were not unified in anything except their desire for liberty. New England had been settled by a different class of English emigres than Virginia, and their economies evolved differently, with manufacturing in the North, and agriculture and slavery in the South. In order to bring all 13 into the fold, compromises had to be made, and one of them—equal representation in the Senate—was critical to enticing the smaller states to join the new Union.

Thus also was the Electoral College born. The vote for president was never intended to be cumulative and thus heedless of colonial or state boundaries. Rather, it was to be individual statewide contests that would express the overall will of a Republic, not that of a phantom “democracy” that would allow heavily populated states to run roughshod over the smaller and newer states. Indeed, many of the western states, with small populations at the time of admission, would never have joined without an equal say in one body of the Congress.

This principle enrages the “progressives,” who would have America be more like the European states: countries ruled centrally from an important capital city, whose elite institutions (Oxbridge in Britain, and the Sorbonne and the École Nationale d’Administration in France) control the destiny of their nations via their graduates.

The European Union, from which the United Kingdom has just seceded bloodlessly, was stealthily designed to be the culmination of central government over as wide an area as possible until such time as global governance ever becomes feasible.

A decentralized country of partially sovereign states like America is anathema to their vision of an intellectual and economic oligarchy. The election of Trump, however, has put that notion on hold for now, as have Brexit and the growing influence of nationalism and populism across Europe and elsewhere.

An Argument With America

The prospect that Trump might well be reelected this fall is infuriating to those who think, as Marxists do, that “history” has an arc and a side. The Senate’s dispassionate egalitarianism, as well as the Electoral College’s regard for state boundaries and regional sentiments, has become intolerable; hence, their constant talk of “our democracy,” when what they really advocate is anarchic mob rule subject to the whims of the moment—a state of political affairs, as history shows, that inevitably leads to dictatorship.

And if you doubt their true intentions, just look at how convoluted and undemocratic their rules for the Iowa caucuses were. Tammany Hall may be long gone, but its corrupt spirit lives on in every blue precinct in the land.

All this explains the Democrats’ quixotic attempt to impeach the president over essentially nothing: Faced with the looming prospect of a sound electoral thrashing in November, the bonzes who control the party (House Speaker Nancy Pelosi, Senate Minority Leader Chuck Schumer, and their rabid donor base) had to do something.

They knew they couldn’t eject Trump from office, not with that pesky “undemocratic” Senate and its requirement of a two-thirds majority for conviction. But they could and did smear him by extending the sham Russia investigation to the former Soviet “republic” of Ukraine; by seizing upon an innocuous phone call during which exactly nothing of importance happened; by holding a kangaroo court in the House, where they have a temporary majority; and then by demanding that the Senate prove the House’s case for it. And all, right on schedule, just 10 months or so before the next election. That it has failed so singularly ought to be a sign to the left that “history” doesn’t take sides.

In short, the Democrats may hate Trump, but their real animus is directed against a system that prevents them from stampeding the public into a hasty and ill-considered action that would have negated the free will not just of the voters, but of the 50 states. Their argument, in short, is not with Trump or even the Republican Party, but with America herself.

Remember that when you go to the polls this fall.