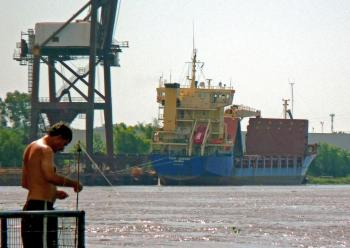 The Thor Leader is seen docked with its cargo deck open at Campana harbor, some 44 miles north-east of Buenos Aires, on Feb. 11. Tensions between Argentina and Britain rose Thursday after Buenos Aires blocked a shipment of pipes it said was bound for the Falklands archipelago. Britain plans to begin drilling for oil in the disputed territory that the two countries went to war over in 1982. (Martin Seguin/AFP/Getty Images)
International

Stephen Jones
View profile
Follow
biggersmaller
Print
LONDON—An oil rig that had been towed 8,000 miles from Scotland to the South Atlantic was at the center of a diplomatic crisis this week, after it began drilling in a disputed territory that three decades ago had provided a reason for war.

The rusted U.K. Ocean Guardian rig broke the surface at a vast offshore oil reserve 60 miles north of the Falkland Islands on Monday afternoon—in the first step of an operation experts say could be worth up to a quarter of a trillion dollars.

The oil find, however, has reopened a diplomatic rift between Britain and Argentina—who fought a war in 1982 over competing ownership claims of the islands.

"The Malvinas will never be surrendered," said Argentine President Cristina Kirchner, using the Spanish name for the islands.
Britain has held the Falklands since 1833 and fought off an attempt by Argentine forces to recapture the archipelago in 1982. The U.K. holds a garrison of 1,000 troops on the islands, as well as a military air base. Royal navy ships in the area have been put on standby.

This week, U.K. Prime Minister Gordon Brown said that he had "made all the preparations that are necessary to make sure the Falkland islanders are properly protected."

On Tuesday, Kirchner secured the backing of neighboring South American countries in her declaration that Britain is "violating international law" over its drilling operation.

"The British are desperate for oil since their own fields in the North Sea are now being depleted," said Venezuela President Hugo Chavez in a public speech.

"When will England stop breaking international law? Get out of there, give the Malvinas back to the Argentine people. Enough already with the empire," continued Chavez.

Argentina claims that the islands were originally part of its territory following independence from Spain in 1816, but were stolen by British colonialists. It is an argument which has not lost any of its force, despite the country's defeat in the 1982 war, which lasted just two months yet claimed the lives of 649 Argentines and 255 British service personnel.

However, the country has already ruled out war as a solution to the crisis. Experts say that the country is more poorly equipped than ever, since the ruling military junta was toppled from power.

Instead, Argentina would use "all legal means" to restrict British access to the Falklands, Victorio Taccetti, the deputy foreign minister said in a radio interview. "But I don't think we can go much further."

The measures include an attempt to restrict all shipping from South American countries to the Falklands. In addition, shareholders of the U.K. exploration firm behind the drilling operation, Desire Petroleum, could be frozen out of business deals in Argentina and perhaps elsewhere within the region.

According to reports, multinational banks, HSBC and Barclays, are among those likely to be targeted.

"We are trying to convince the British that it is in their interest to negotiate with Argentina," said Taccetti. "This is not an escalation, this is just something that we have to do in order to protect our rights—because we consider that this exploration and eventual exploitation of our natural resources is illegal."

However, defense experts say that the first part of the plan—to restrict shipping—could potentially cause a standoff and possible confrontation.

"Argentina does not have a substantial naval capability," former Navy Commander Michael Codner told the Scotsman newspaper. "They may, however, feel able to carry out some kind of constabulary operation, say warships preventing oil vessels from operating. You could then have an incident at sea."