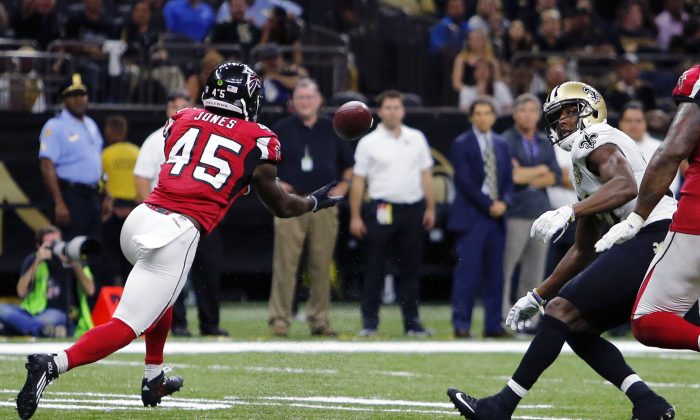 Atlanta Falcons outside linebacker Deion Jones (45) intercepts a pass from New Orleans Saints quarterback Drew Brees, not pictured, and returns it for a touchdown, in the second half of an NFL football game in New Orleans on Sept. 26, 2016. (AP Photo/Butch Dill)
NFL

NEW ORLEANS—For all of Dan Quinn’s background as a defensive specialist, the Atlanta Falcons’ second-year coach is fielding an offense about as good as anyone right now.

Matt Ryan has been efficient. Running backs Devonta Freeman and Tevin Coleman are wearing down defenses while keeping one another fresh. The offensive line is winning praise for its run-blocking and pass-protection. And the Falcons are outscoring even explosive opponents, as they did in a 45-32 triumph over the New Orleans Saints on Monday night.

“We wanted to stay aggressive and keep attacking,” Quinn said. “The team did a very nice job of mixing up the run and pass.”

It was a satisfying triumph for the Falcons (2–1), who came in with just two victories in their 10 previous trips to the Superdome. It also made Atlanta the early front-runner in the NFC South.

The winless Saints (0–3), by contrast, are in last place and were less competitive against the Falcons than they were in their first two losses to Oakland and the New York Giants.

Saints quarterback Drew Brees is still racking up gaudy numbers. He passed for 376 yards and three TDs against Atlanta. But he never seems to have much margin for error. He threw one interception on a tipped ball and it was returned 90 yards the other way by rookie linebacker Deion Jones, who just happens to be a New Orleans native and LSU alum.

Afterward, Brees lamented that Monday’s result might have been different if not for a pair of major Saints mistakes—his interception and a muffed Atlanta punt that the Falcons converted into an 11-yard touchdown drive.

Some other developments of note coming out of Atlanta’s win the Big Easy:

Freeman and Coleman are taking pressure off Ryan by running well and turning short receptions into considerable gains. They combined for 296 yards from scrimmage and four TDs in New Orleans. Freeman rushed for 152 yards on just 14 carries, an average of nearly 11 yards per run. He scored his lone TD on a 13-yard pass from Ryan and finished with 55 yards receiving on five catches. Coleman ran for three TDs, once from 6 yards out and twice from 2 yards.

They wound up allowing 442 net yards against Atlanta, but when Saints coach Sean Payton was asked about the toll injuries have taken, he responded, “That is not going to be an excuse for not playing smart.”

The Falcons’ star quarterback didn’t keep pace with Brees — and didn’t need to. But he did play a relatively clean game. His two TD passes gave him seven TDs against one interception through three games. He is also completing about 71 percent of his passes for 323 yards per game.

After struggling to get involved in New Orleans’ passing game, tight end Coby Fleener — a top acquisition in free agency — looked in sync with Brees. Fleener caught seven passes for 109 yards and a touchdown, his best performance by far as a Saint.

Jones has demonstrated a lot of upside in his first three regular season games as a pro. In addition to his pivotal interception for a score in New Orleans, Jones was in on nine tackles and credited with two passes defended. For the young season, Jones is now second on the club with 25 solo or assisted tackles.