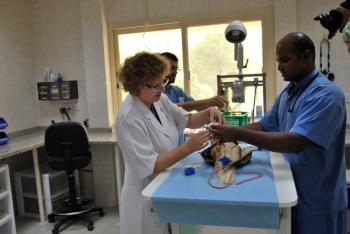 ABU DHABI, United Arab Emirates—In a country that invented the falcon passport and where the national airline allows the birds to be carried into the cabin, a hospital devoted exclusively to the pampered pets is not so surprising.

The Abu Dhabi Falcon Hospital is the biggest of its kind in the world, a testament to the esteem in which the Bedouin population of the United Arab Emirates (UAE) holds these birds.

Although falconry is often ranked alongside other medieval sports such jousting as an anachronism in modern society, in the Middle East it remains immensely popular.

“In the West, falconry is often regarded as a sport. Here it has been seen as a necessity,” she said.

“The Bedouins used to capture falcons and use them for hunting meat. Once they captured the bird, it had to be held 24 hours a day, for two weeks. After that, it was ready for hunting.

“Today, even though falcons are no longer used for hunting, they remain a symbol of the UAE national identity. Falcons are not regarded as a tool, but like another member of the family.”

The falcon is the national bird of the UAE, and the image of the airborne hunter is carried on the crests of most government departments.

The country’s national carrier, Etihad, allows falcons to be carried into the cabin of the aircraft, provided the bird has a hood over its eyes.

The UAE became the first country to introduce a "passport" for falcons, which speeds up the movement of the birds protected under the Convention on International Trade in Endangered Species (CITES).

Hunting is banned in the UAE and many falcon owners take their birds to Pakistan, Morocco, or Kazakhstan to hunt.

Many of the injuries that Muller and her team treat, such as broken wings or feet, are incurred on such hunting trips.

The hospital looks after around 5,000 birds a year, Muller said, and includes a falcon hotel for pets whose owners are taking a vacation.

The facility, which Muller likens to Abu Dhabi’s seven-star Emirates Palace Hotel, is fully airconditioned and offers a large area for the birds to fly.

“Most times they don’t want to leave,” she said.

The birds can also be expensive to keep. One falcon eats at least one quail a day, and sometimes a mouse.

Muller said that the hospital tries to keep the cost of treatment down as much as possible.

“This is the most democratic of interests, which cuts across all classes,” she said. “We try to make this as affordable as possible, so anyone can do this.”

The surgery itself contains much of the equipment you would expect to find in the most modern hospitals for humans.

An endoscopy unit transmits digital images to the waiting room area, where worried bird owners can watch the progress of the surgery.

“It’s just like where your child is in hospital, you come in to check up on them to see how they are doing,” said Muller. “Some owners come in every day.”

Despite the restrictions imposed on the capture of falcons in the wild by the adoption of CITES law, coupled with the ban on hunting, the level of interest in falconry has not declined in recent years in the UAE.