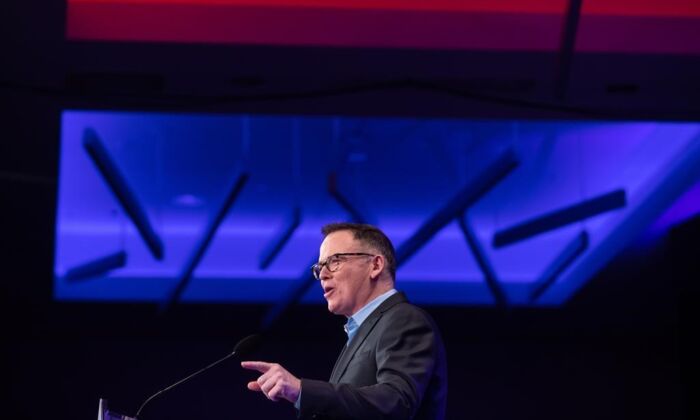 Kevin Falcon addresses the crowd after being elected leader of the British Columbia Liberal Party in Vancouver, on Feb. 5, 2022. (The Canadian Press/Darryl Dyck)
Canada

Falcon Heads to Victoria Pledging BC Liberal Rebuild, Looks for Seat in Legislature

VANCOUVER—The new leader of the British Columbia Liberals says he’s on his way to Victoria with promises that will rebuild the party and attract voters while he also seeks his own seat in the legislature.

Party members acknowledge that Kevin Falcon has a big renewal job ahead, as the Liberals have lost two consecutive elections after holding power for 16 years. Falcon is the party’s third leader since 2017.

He replaces Andrew Wilkinson, who resigned shortly after the October 2020 election when the New Democrats were voted in with a majority government.

Party members selected a new leader in online and phone voting that started last Thursday. The system awarded points to the seven candidates based on how those ballots were cast.

Falcon scored a fifth ballot win Saturday, taking just over 52 per cent of the points available, in a sometimes fractious leadership race that saw the former cabinet minister face attacks from his opponents as the perceived front-runner.

Former Liberal cabinet minister Mary Polak said Sunday rebuilding the party will be Falcon’s top priority, but it poses difficulties for an Opposition leader, especially without a seat in the legislature.

She said the margin of Falcon’s victory and his lead from start to finish gives him some added strength as it shows his widespread support among party members.

“It’ll be job one for the new leader to get everybody on the same page,” said Polak. “That’s always more challenging for a leader of the Opposition because there’s not a lot they have to work with in terms of tools that would perhaps reward people for loyalty.”

Despite the admirable work done by interim leader Shirley Bond in the legislature since Wilkinson’s resignation, the Liberals and voters have not had a leader to rally around since the 2020 election, Polak said.

“It has a big impact on how visible the party can be, how much their message gets out,” she said.

The B.C. legislature resumes sitting Tuesday with a throne speech.

Falcon said in a statement late Saturday he will quickly seek a seat in the legislature and consult with the 28 members of the party’s caucus about a potential riding in which to run.

“Once that seat becomes available, I will immediately ask (Premier) John Horgan to call that byelection at the earliest possible time,” he said.

Falcon held a seat in Surrey for three terms before deciding not to run in the 2013 election.

Falcon, 59, said he left politics to spend more time with his young family. He has been working in the private sector with a Vancouver investment and property development firm.

He held a number of portfolios in cabinet after first being elected in 2001, including transportation, health, finance and deputy premier. Falcon finished second in the 2011 leadership contest, losing to Christy Clark, who served as premier until the party lost power.

Falcon focused on past Liberal accomplishments in his first news conference as leader late Saturday, saying the former Liberal governments of which he was part made major accomplishments on environmental, financial and infrastructure fronts.

“The grass didn’t grow dry under our feet,” he said. “We got big things done and I don’t see that happening now. I believe that the public wants to support people and leaders that aren’t afraid to get big things done.”

Falcon said he plans to be at the legislature as much as he can despite not having a seat, but he’ll also travel the province.

“I’m going to talk candidly to the public. I want them to understand how much I care about this province and our future, and it will take time,” he said. “I believe it’s going to take at least a couple of years before people really start to say, ‘Hey, you know what, I like what he talks about.'”

The B.C. Liberals are not affiliated with the federal Liberal party and have described themselves as “a made-in-B.C. free enterprise coalition.”

Mike Bernier, a Liberal member of the legislature from Dawson Creek, said he was among a dozen caucus members who backed Falcon because they believe he has the experience and skill to unite B.C.’s urban and rural voters, and its Conservative and Liberal supporters.

“I’m the furthest MLA from Vancouver but I still supported Kevin because I knew we needed somebody who doesn’t just have the ability to win the rural seats we already win,” said Bernier. “We need to get the trust back of the public and our voters, and we need that all across B.C., not just in pockets.”