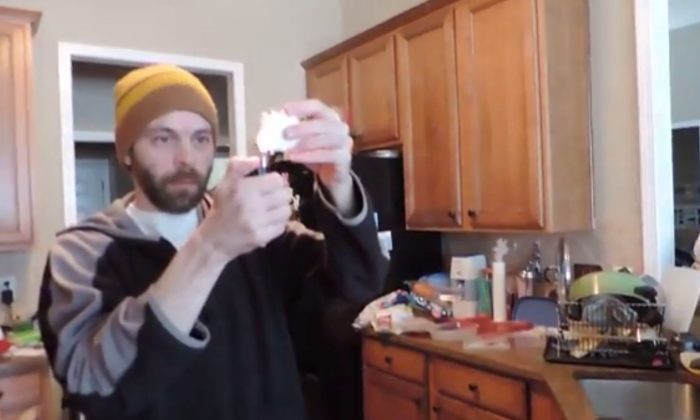 There’s been a number videos uploaded to YouTube and on conspiracy sites claiming that snow that has recently fallen is “plastic,” “geo-engineered,” or is capable of “burning.” Some blamed the phenomenon on HAARP, which some conspiracy theorists believe is a U.S. project to control the weather or even trigger earthquakes.

Many of the videos show a person holding a flame to a piece of snow and note that it doesn’t melt, goes black, or doesn’t drip any water, claiming it’s fake.

“It smells like burnt plastic,” said one YouTube user after attempting to light some of the alleged fake snow on fire.

But it seems that for every video uploaded about “burning” snow in Georgia and Alabama, there’s another trying to debunk it.

In the videos, the uploaders are seen holding a lighter or torch to a piece of snow.

According to users on the Metabunk website, it’s not the snow that is “burning,” but the blackened snow is from the lighter soot–the product of incomplete combustion.

The smell of burning is likely from the lighter or torch or people accidentally burning other objects nearby, such as gloves, said users on that site.

It’s also possible that some of the burning snow videos were uploaded as a hoax.

Some YouTube uploaders have said is that lighters simply aren’t a good way to burn snow.

Many said that butane lighters will leave a black mark under just about anything that doesn’t outright burn, such as glass.

Other videos that were uploaded show the user burning a piece of ice from the freezer, and it also went black.

“Bottom line, if you don’t want to waste 5 minutes watching this video, butane burns dirty. The smell is not from the snow, the black on the snow is not because its plastic; it’s because of the butane,” said one user.

Here’s another video about clean and dirty butane flames, which could contribute to the “burning” snow.

Many of the “burning” snow videos were posted to conspiracy website Before It’s News, but later, the website offered an update saying that it was a “false alarm.

“Upon some in-depth research, I am happy to tell everyone who is hearing these reports (including my previous post) of ‘snow that won’t melt when heated’ and ‘snow that turns black when heated’ or ‘fake snow’, etc.—it’s perfectly normal!” the post reads.

Another theory that is going around is that it could be sublimation, which means “the conversion between the solid and the gaseous phases of matter, with no intermediate liquid stage,” according to the U.S. Geological Service.

Steve Ackerman, who is a professor of atmospheric and oceanic sciences at the UW-Madison, explained to the Wisconsin State Journal that snow sublimates in a process that is similar to evaporation.

“Whenever there is an interface of air and water, either liquid or solid, you have molecules trying to leave the water,” he said. The constantly vibrating molecules in a liquid or solid are restrained but a water molecule will escape the water and enter the air when it moves violently enough. “We call that evaporation from a liquid, and sublimation from a solid,” Ackerman said.

Sublimation is obvious in the freezer, where ice cubes sometimes shrink with time, or in snowfields, which eventually waste away without melting.

“You notice there’s no liquid water, none of the hard ice that results from melting and refreezing, but the snow still shrinks,” Ackerman said.

To see the effects of sublimation, people can take frost from the freezer and hold it over an open flame.