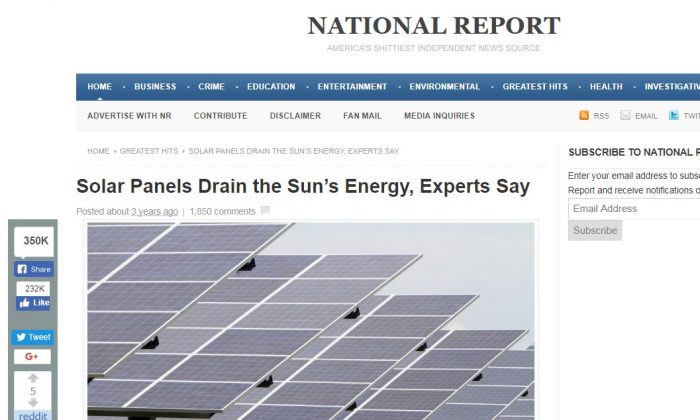 Maricopa County Sheriff’s Office spokesman Mark Casey confirmed that Horner died in his bed on Sept. 18, NBC News reported. There were no signs of foul play, he said.

Horner, he said, had a history of prescription drug abuse, noting there was “evidence at the scene suggested this could be an accidental overdose,” the spokesman stated.

Horner had written numerous false stories over the years, claiming that street artist Banksy died, that Obamacare would require people to get RFID chip implants, fake Ebola outbreaks, and that solar panel “drain the sun’s energy” via his website, National Reporter, which launched in 2013.

He also claimed to have written a number of fake news stories during the 2016 election.

“So I think that was a lot of the genius behind a lot of his work was pushing ideas that either people wanted to believe or thought was possible,” J.J. Horner, his brother, told NBC.

“I think he just wanted people to just think for themselves and be credible for their actions,” J.J. Horner added. “Read more; get more involved instead of just blindly sharing things.”

After the 2016 election, Facebook and Google cracked down on hoax websites.

Horner operated a number of fake news domains such as ABCNews.com.co, which appeared very similar to ABC News, and similar websites.

In TV interviews, Horner said that he made about $10,000 per month in ads during the election season.

He said that he often times would target supporters of Donald Trump.