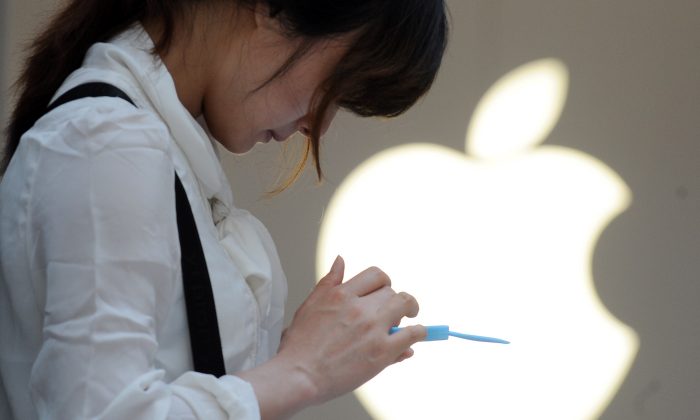 A woman uses her mobile phone outside an Apple store in Shanghai on May 7, 2012. (Peter Parks/AFP/Getty Images)
China

The use of social media as a source of news has become a fixture in the United States—scrolling Twitter feeds appear next to news anchors, and tips from Facebook regularly result in television coverage. But not in China.

The Chinese Communist Party has recently created a new regulation that describes information from social media as “fake news” and “rumors,” effectively banning its use as a source of information, lest serious consequences follow.

A number of major news providers have already been sanctioned, reports say.

The regulation appeared just days after the appointment of the nation’s new internet czar, Xu Lin. His predecessor, Lu Wei, oversaw a block on Google services and its withdrawal from China. Xu seems intent on dialing it up a notch.

The Cyberspace Administration of China issued the new regulation in a July 3 statement.

“It is strictly forbidden for websites not to identify sources, or to falsify news sources, use hearsay to fabricate news, or use imagination to distort facts,” the statement read.

It seemed to indicate that “social media tools” could potentially be used — as long as the information was verified. But at the same time, it’s regime authorities who decided what is “verified” and what isn’t, experts say.

A number of websites and accounts circulating false news have been penalized, the Cyberspace Administration wrote in the same notice. These include major news portals Sina, Phoenix, Tencent and NetEase.

What they fear the most is media breaking away from their control.
— Zhu Xinxin, Independent Chinese Pen Center

Examples of stories that fall afoul of the new regulations include “the moral decay in a northeastern village,” arson on a bus in Changsha, Hunan Province, and a follow up story on the case of Wei Zexi, a university student who died after pursuing bogus medical treatments advertised on China’s premier search engine, Baidu.

“This measure from the Cyberspace Administration of China exhibits the standpoint and opinion of the government, and strikes a warning to every website and news outlet,” declared Wang Sixin, a professor at the Communications University of China, on a website hosted by the Party’s Central Committee directed at minors and their guardians.

Critics have seen it as yet another infringement on the already limited public sphere in China. “What they fear the most is media breaking away from their control,” Zhu Xinxin, a member of the Independent Chinese Pen Center, a network of writers, told Radio Free Asia.

“We can see that the websites submitted to corrective punishment are the standard media,” Zhu said, referring to commercial outlets that are still heavily influenced by the state. Anything not in line with these outlets are now being simply declared “fake,” Zhu said. “It’s basically using opposing fake news as a justification for preventing other media from exhibiting independence.”

The regulation has triggered widespread discussion from netizens—none of which, according to the new rules, could actually be reported on in the press.

“So it will be fine if we simply take Xinhua News Agency and People’s Daily as the guideline, and just forward them?” asked the disgruntled Sina Weibo user “Hunan tumbler.”

Another asked: “Didn’t the Lei Yang case first appear in social media?” referring to a notorious death in custody that led to alumni groups mobilizing online, then attracting media attention, and thus forcing the authorities to provide a response. Without the gaze of public pressure, it is likely that those responsible for Lei Yang’s death would have met with no repercussions. “Sometimes it has to work backwards,” the internet user said, “from mass pressure on media, to pushing the law enforcement institutions to take responsibility.”

“Cyberspace in China is mimicking North Korea and isolating us from the world,” wrote another netizen.

The new rule is the Chinese Communist Party’s latest measure to manage the role that new media services—difficult to track and censor because of their speed and ubiquity—play in China’s highly constrained public sphere. On June 25 and June 28, internet regulatory authorities issued two new documents that more strictly regulate search engines and mobile internet apps.