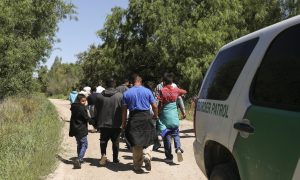 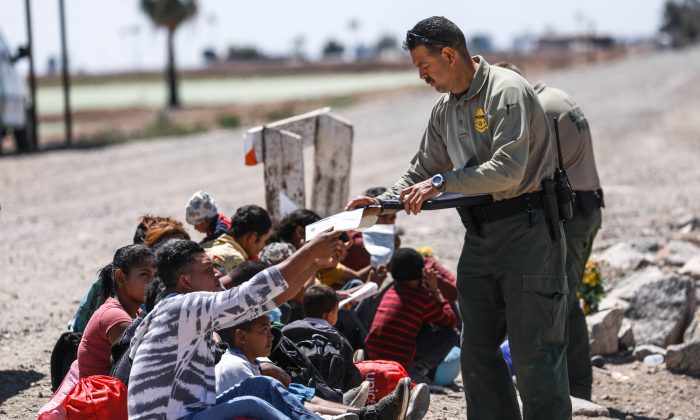 A group of illegal aliens is processed by Border Patrol agents after crossing from Mexico into Yuma, Ariz., on April 13, 2019. (Charlotte Cuthbertson/The Epoch Times)
US News

’I just brought her because I know they're gonna release me. So I asked her mom, ‘Can I bring her up here?’’
By Charlotte Cuthbertson

EL PASO, Texas—No one is able to estimate how many fraudulent families have already been released into the United States. But almost 250,000 individuals within “family units” have been apprehended by Border Patrol in the past seven months.

A new initiative by Immigration and Customs Enforcement (ICE), using rapid DNA testing, has revealed a 30 percent rate of fraud in the two test areas of El Paso and Rio Grande Valley, Texas.

The test, which requires consent from the adult, uses cheek swabs from both the adult and child and takes about two hours to get results.

Homeland Security Investigations, a division of ICE, is also interviewing families that Border Patrol suspects are fake. Between mid-April and May 10, HSI special agents interviewed 562 family units, with a full 48 percent of them being determined as fake. Of the 562 interviewed, 95 fraudulent families were identified, in addition to more than 176 fraudulent documents or claims.

“The fraud can be in a number of different ways. You could have two adults that are actually related, for example, a father and a daughter, but the daughter has a counterfeit or altered birth certificate showing her to be a juvenile,” said Jack Staton, special agent in charge, ICE Homeland Security Investigations El Paso.

In one case, Staton said a man eventually told agents that the “daughter” he brought was actually his niece.

“‘I just brought her because I know they’re gonna release me. So I asked her mom, ‘Can I bring her up here?,’” Staton said the man told agents.

“That is disturbing. That is beyond disturbing, because these children are making this journey with this adult. The only reason [the adult] is willing to bring the child is because they believe they’re going to get released once they get into the United States.”

On May 7, HSI agents discovered that a 6-month-old wasn’t the “son” of the Honduran man he was with. The man, Amilcar Guiza-Reyes, 51, illegally crossed the Rio Grande River near Hidalgo, Texas, with the baby.

He had previously been deported in 2013.

“While we have seen egregious cases of smugglers renting and recycling children, this case involving a 6-month-old infant is a new low—and an unprecedented level of child endangerment,” said HSI Acting Executive Associate Director Alysa Erichs in a press release.

In cases such as this, the child will be transferred to the Department of Health and Human Services and processed as an unaccompanied minor, which means a sponsor will be found to take the child. Or, the consulate of the home country will help to identify the real parents of the child.

Staton said HSI takes investigations further to try to identify how and when the child and adult were paired, and what would happen to the child once they made it into the United States.

“We try to identify the networks that are responsible for it. And then we prosecute those networks,” he said.

The adults involved in fraudulent family claims are prosecuted by the Department of Justice for federal crimes including: immigration crime, identity and benefit fraud, alien smuggling, human trafficking, and child exploitation.

“So you could literally have someone claiming to be 17 or 16, that we’re turning over to Health and Human Services that’s going to be housed and sent out to a sponsor with children, that is actually 21, 22, 23 years old,” Staton said.

As many as one million illegal aliens are expected to be apprehended by Border Patrol in fiscal 2019. More than half of the illegal aliens who have arrived in the country this year claimed to be part of a family. The number of family units has increased by 400 percent, year over year.

Family units generally claim credible fear at the border, which ensures their release into the country within several days, along with a future court date that most fail to honor.

Staton said he doesn’t see a law enforcement fix for the problem.

In 2014, fewer than 1 percent of all men apprehended by Border Patrol in the Rio Grande Valley Sector had a child with them. That number now sits at 50 percent, according to Rodolfo Karisch, chief Border Patrol agent for that  sector.

Staton has been with Border Patrol and ICE for 24 years.

“As a Border Patrol agent and later on as a special agent investigator, you would never see, for example, adult males bringing small children with them into the United States. That was not the norm,” he said. “You see that all the time now.”