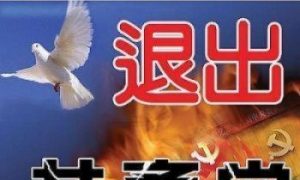 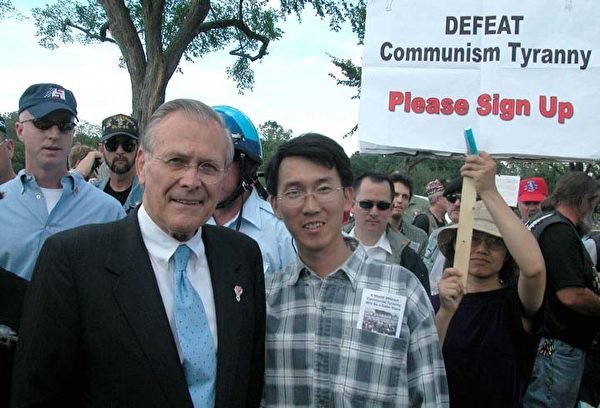 Donald Rumsfeld took a picture with a volunteer of the Global Service Center for Quitting the CCP on May 29, 2005, near the Lincoln Memorial. (The Epoch Times)
Chinese Regime

A fake quote being attributed to the late Donald Rumsfeld, former U.S. Defense Secretary, saying “I will not see in my life the Chinese Communist Party (CCP) beyond 100 years of rule,” has been circulating on China’s tightly monitored online platforms.

Social media posts labeled Rumsfeld a “hardcore anti-communist,” saying that his death was “keeping his words with his life” and “a gift to the CCP Centennial.” One such post on China’s microblogging site Weibo had over 15 million views, with thousands echoing the viewpoint.

Out of all of Rumsfeld’s efforts to thwart communism, the following is probably the least reported: he was one of the pioneers who supported the Chinese people’s spiritual movement to sever ties with the CCP.

On May 29, 2005, months before he visited Beijing in October, he encountered volunteers of the Global Service Center for Quitting the CCP. They introduced the then very new movement to him. He had just spoken at a concert for veterans at the Lincoln Memorial and credited them for bringing down the Berlin Wall, doubling the number of democratic countries as a result.

At the time of Rumsfeld’s signature, two million Chinese had quit the CCP and its organizations, according to the Global Service Center for Quitting the CCP. That number has since skyrocketed to about 380 million; an open condemnation of the CCP General Secretary Xi Jinping’s claim at the CCP’s centennial celebration that the Chinese people wouldn’t agree with “any intention to separate or divide” them from the party. According to the Global Service Center’s website, over 35,000 people submitted their statements to sever ties with the CCP on July 1.

Yi Rong, president of the Global Service Center for Quitting the CCP, told The Epoch Times that “more and more Chinese are waking up to the evilness of the CCP regime.” She added that the whole world has experienced firsthand the CCP virus, the novel coronavirus that causes the disease COVID-19, and witnessed the party’s role in information control and avoiding responsibility, which saw the virus spread around the world.

The “Quit the CCP” movement, also dubbed “Tuidang” (“Quitting the Party” in Chinese), was inspired by the editorial series “Nine Commentaries on the Communist Party,” first published in the Chinese language edition of The Epoch Times on Nov. 19, 2004.