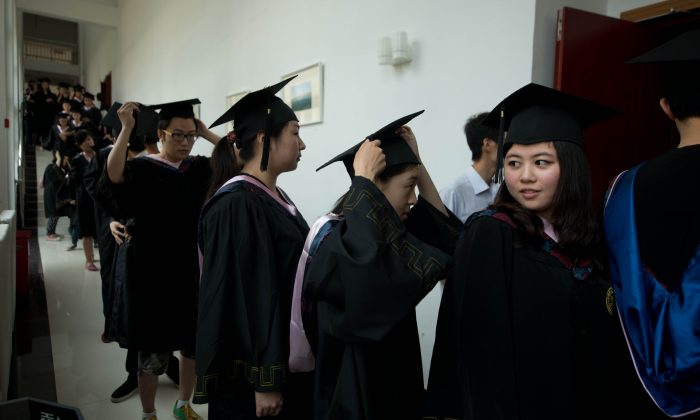 Students line up to receive their degree certificates at the private Kade College Capital Normal University on the outskirts of Beijing on June 26, 2013. Only 43 full-time private institutes and 24 part-time institutes of higher education in Beijing are legally registered to offer degrees. (Ed Jones/AFP/Getty Images)
China

Bogus degrees from non-existent Chinese universities that mimic the identities of real and legitimate institutions are most likely issued by one of Beijing’s diploma mills, says China-based Economic Observer.

A Chinese resource for prospective university students, Shangdaxue, compiled a list of 100 fraudulent institutions, none of them authorized or certified, that sell sham degrees that appear to be legitimate, said the Economic Observer. According to Shangdaxue, 70 of them are operating out of Beijing alone.

Only 43 full-time private institutes and 24 part-time institutes of higher education in Beijing are legally registered to offer degrees, but those 70 schools listed by Shangdaxue are not among them.

In China, where grueling university entrance exams weed out many prospective students, the purchase of a fraudulent degree from a diploma mill is not that unusual. These “Universities of Wild Chickens,” as they are called in China, use Photoshopped images of genuine institutions on their websites in addition to the official sounding names. Sometimes the websites even feature doctored images of students, said The Economist.

Although the fraudulent websites claimed to be the official website for the institution, 90 percent of them operated multiple identical websites under different domain names, and more than 20 of them lifted information directly from legitimate schools’ websites and pasted it into their fake sites.

The Economist reported last year that “almost anyone in China can buy a fake degree,” whether aspiring students or businessmen who want to plump up their qualifications. Xiong Bingqi of Jiaotong University in Shanghai (a genuine university) told The Economist, “Chinese people pay more attention to having a diploma than they do to having a real education.” He added: “A diploma is worth actual money, whereas an education is not.”