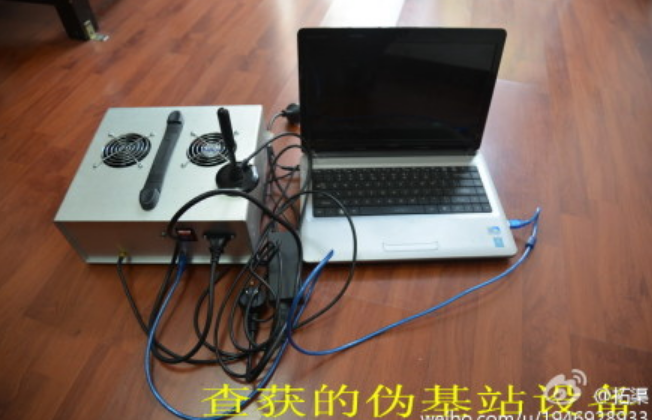 A fake cellphone base station (left) with an antenna connects to a laptop. Criminals use this to hijack cellphone signals and then send advertising messages, or attempt to cheat Chinese out of their money. (Screenshot via Weibo.com)
China

“Dear customer,” the text message from the Industrial and Commercial Bank of China said to Mr. Yu, a resident of Shanghai. “Your password will expire today. Please log into www.icbncre.com and change it. We are sorry for the inconvenience.”

Yu dutifully logged in, and before long he received another text message from the bank—this one real—informing him that his bank balance of 30,000 yuan had been emptied from the account. Yu reported it to the police, and screenshots from his iPhone documenting the messages ended up online.

Yu had become the latest victim of cellphone tower spoofing, where criminal gangs slowly drive around in vans with their own cellphone transmitter stations, sending out thousands of text messages asking unsuspecting citizens to send them money.

The Industrial and Commercial Bank is the largest in China, so if 1,000 people received the spoofed text message, scammers would have only required one person like Yu to make it worth their while.

Masquerading as banks is a popular trick for the texting criminals—and so is pretending to be a landlord.

The Chinese authorities earlier this year launched a nationwide crackdown on the fake cellphone transmitter stations, after their rampant use by criminals to defraud Chinese of vast sums.

Official reports said that nine central government agencies have set up a special team to crackdown on the crime, including the security forces, the courts, and propaganda authorities. They will go after the perpetrators, but also attempt to prevent the manufacture and sale of the equipment used to carry out the scam.

That could be a little difficult, however: all it takes to set up one of these scams is a notebook computer and a fake cellphone station, to which an antenna is connected. The base station is a small, portable box, manufactured and sold by criminal networks. The equipment can easily be carried in a car or even on a bicycle, and will send out messages as long as the vehicle is moving under 37 miles per hour.

The criminals usually send out messages in pulses of 8-12 seconds—this blocks the regular cellphone signals in the vicinity, giving them the opportunity to fill text message inboxes with spam, scams, or sucking up information in the area.

People’s Daily, the official mouthpiece of the Communist Party, said in an article that these fake transmitter stations send out around 100 billion spam texts every year, and that over 8 billion of them are scams for money.

Because the fake base stations interfere with regular cellphone towers—forcing the cellphones in that area to connect to it, rather than the cellphone tower operated by legitimate phone companies—the criminals are able to spoof the phone numbers as coming from a bank’s customer service line, or even police emergency numbers.

Users of the older CDMA technology, including those with China Telecom, are safe, since the equipment does not work on that network.

A case of a gang that ran such a scam from Wenzhou was uncovered recently. Reports said that the malefactors could pump out 60,000 text messages in an hour. They produced and sold the fake base stations to 29 provinces around China. Over 400 suspects were in the gang, which earned roughly $209,000 a month from its exploits, according to Zhejiang News.

Official reports give some indication of the size of the problem: 3,767 cases of the sale of the fake base stations have been uncovered; 53 production stations for the units have been found and destroyed; 2,826 of the boxes have been seized.

And yet, Chinese continue to complain on the Internet that they’re being bombarded with fake text messages and ads pretending to be from their bank—or their out-of-town landlord.