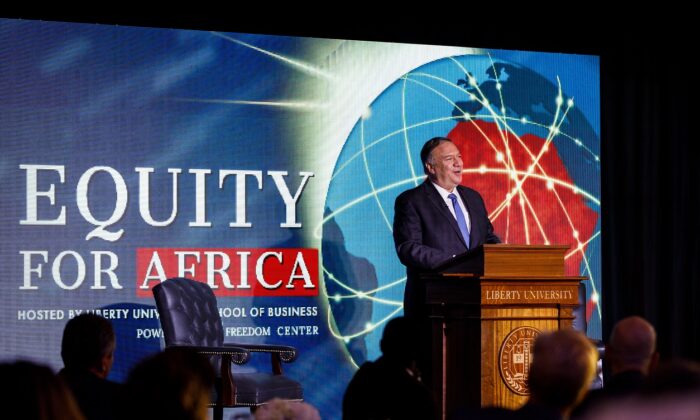 Former Secretary of State Mike Pompeo speaks at the Equity for Africa Summit in the Montview Ballroom at Liberty University in Lynchburg, Va., on April 13, 2021. (Chase Gyles)
By Douglas Burton

Former U.S. Secretary of State Michael Pompeo is endorsing an effort to jumpstart the economies of Africa through a bottom-up revolution of African entrepreneurs.

That revolution involves countering China’s efforts to dominate the continent while articulating a Christian approach to Africa’s development.

Pompeo gave the keynote speech on April 13 at a summit of CEOs and African political leaders called “Equity for Africa,” at Liberty University’s Business School in Virginia.

“Greater development improves security for all of us,” Pompeo told the gathering of 160, which included American CEOs and business owners from 14 African nations.

“Terrorist thugs for a long time have taken advantage of less developed countries and used them as safe havens and inflicted enormous harm and enormous destruction of economic prosperity.

“As we can increase economic growth and the capacity for new businesses to provide wealth and opportunity for people throughout Africa, America will be a better place.”

Crediting the phrase “America First” as a moral principle that nations could replicate by doing their utmost to bring security and prosperity to their own citizens, Pompeo said that “when they did that, they could counter a narrative in Africa that comes from the threat posed by the Chinese Communist Party.”

China’s trillion-dollar footprint in Africa, part of the Chinese regime’s Belt and Road Initiative, cast a shadow over the three-day gathering.

Launched in 2013, Belt and Road projects may be found in 42 African countries. China is the largest funder of infrastructure projects in Africa, giving financing to 20 percent of all projects and building one-third.

Chinese companies are building roads, railways, and power plants that African nations have lacked for decades, but with the risk that key national assets can be lost in the event of loan defaults.

“It’s a fact that African businesses are inundated with Chinese money,” Ted Yoho, a former congressman from Florida and a panelist at the summit, told The Epoch Times.

To compete with China’s dominant investing in the continent, the U.S. Congress, with Yoho’s involvement, passed the BUILD Act in late 2018, which set aside $60 billion for U.S. companies to use as financing for collaborative projects in the developing world.

“African countries should be wary of authoritarian regimes,” Pompeo said. “We know the absence of religious freedom, the absence of dignity, that comes from tyrannical regimes that intend to spread their tyranny all across the world.

“It should not be the case that African nations must be dependent on these totalitarian nations for their vital infrastructure.”

Equity for Africa marked an ambitious outreach in thought leadership for Liberty University, founded by the late Baptist televangelist Jerry Falwell, and until his resignation last year, by Jerry Falwell Jr., and for its business school headed by David Brat, a former U.S. congressman from Richmond, Virginia.

Brat was credited with planning the event with creative contributions from many evangelical advisers, including Kevin Jessip, founder of Global Strategic Alliance, and a bevy of African expatriates in the United States.

Pompeo’s speech coincided with his new role as a senior adviser at the university’s Standing for Freedom Center.

“We are here to articulate a national plan for family, development, and economic transformation by meeting the felt needs of the people of each nation,” Jessip told The Epoch Times, warning that China’s vast infrastructure initiative is attempting to control and contain the peoples of Africa for the long term.

The approach of a “global strategic alliance,” by contrast, is to enrich African citizens through a boom of entrepreneurism. “The Christian approach means releasing the people and allowing them to control their own destiny,” Jessip said.

Of the 75 panelists that presented their expertise in the course of two full days of meetings, virtually all asserted their belief that the continent of Africa will bloom as the place of the world’s next economic miracle in the next 20 years.

They included hedge fund manager Rod D. Martin, a Florida GOP power player, who told The Epoch Times, “I fully believe that Africa is going to be the place of the next economic boom, just as East Asia was in the 1980s.”

Jessip, an evangelical activist who helped organize a massive prayer assembly called “The Return” on the Washington Mall on Sept. 26, 2020, believes that Africa and Western Christian faithful are entering a so-called Kairos moment, a Greek word which means “a proper or opportune time for action.”

As Western nations settle into near-zero population growth, African nations are facing a population explosion, offering the world a vast resource of skilled and low-skilled labor for industry.

Africa’s population is expected to double by 2050. Nigeria, the most populous nation, is forecast to have by that year 400 million people, overtaking the United States as the world’s third-most-populous country.

Nigeria has multiple contracts with Chinese companies to build infrastructure, which is natural, he pointed out, because developing countries have a great need for infrastructure development.”

Osinbajo, a law professor and an ordained pastor in the Redeemed Christian Church of God, also spoke to the opportunities that Western companies have passed over in Africa in recent years.

“There are fewer investments coming from the West to Africa, which is why the Chinese have taken advantage of that gap and stepped in with favorable investments,” he said.

That is about to change, according to the investors and political activists at Equity Africa.

“God’s about to do a sovereign move,” Jessip told The Epoch Times. “He is going to do His own thing. The purpose of the Global Strategic Alliance is to move the body of Christ to move with Him.”

“We are casting our bread upon the waters,” he said, citing Ecclesiastes 11.

Jessip said the American outreach to African entrepreneurs is being returned by a steady stream of African preachers coming to the North American continent.

Africa holds at least 600 million Christians devoted to their faith, and many are eager to bring the fire of faith back to the United States, which now registers fewer than 50 percent of its population as Christian believers.

Douglas Burton
Douglas Burton is a former U.S. State Department official who was stationed in Kirkuk, Iraq. He writes news and commentary from Washington, D.C.