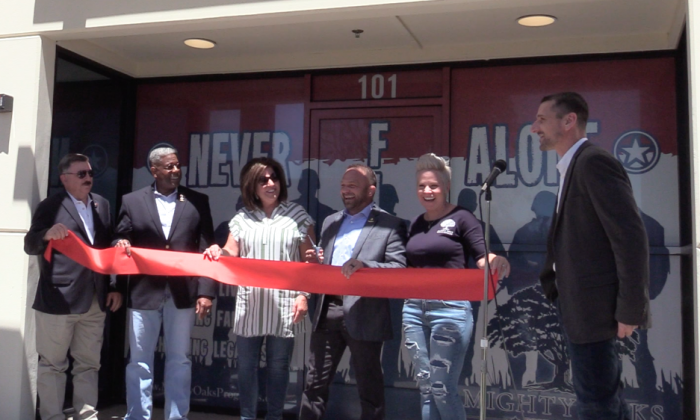 Faith-based healing has been used for thousands of years in helping resolve various types of health issues. Mighty Oaks’ success have made faith-based veteran assistance programs a unique addition to many other contemporary programs.

Robert Cal, a former marine shared his personal story with The Epoch Times about his previous suicidal tendencies experience under PTSD: “I took my service pistol. I press it to my forehead, I put it on my chin, and I put in on my mouth, and I was just kind of rotate it. I just want to end it [my life].”

Cal previously graduated from Mighty Oaks Wounded Warrior Program, in which he fully recovered from PTSD. He is currently working as one of the program managers at Mighty Oaks.

Cal was diagnosed with serious PTSD after serving for years and completing many deployments in the Marine Corps. His best friend was killed in combat. Several of Cal’s veteran buddies committed suicide because of PTSD. One of them pulled the trigger and killed himself right in front of his own wife and Cal.

PTSD also caused Cal’s divorce and his broken relationships with his children.

As his PTSD symptoms became worse, Cal finally started pointing the gun to himself during his military mission in Afghanistan in 2014 and seriously thought of ending his own life. “I was just so tired of living a life like this,” he said.

Cal was lucky because Mighty Oaks reached out to him. “I skipped out of my [Mighty Oaks] programs at the first two times. The third time I went there intoxicated thinking they would kick me out of there and send me home,” Cal remembered how he started his journey of recovery at Mighty Oaks.

Cal was not alone. He was only one of the thousands of combat veterans who have recovered from PTSD with the help from Mighty Oaks.

In an exclusive interview, Chad Robichaux, the founder of Mighty Oaks, shared his secret of success with The Epoch Times.

“The truth of matter is that people’s lives could be changed in one moment when they want to step out of the life of their own way, their reckless and selfish way, and step into a life they were created to live,” said Robichaux.

Mighty Oaks’s journey of helping the veterans was started by Robichaux’s own recovery from his serious PTSD. He got his life back with the help from his family and church.

As he talked about how he was affected by PTSD, Robichaux remembered an incident when he came back home from his military mission for his daughter’s birthday. His young daughter didn’t like the cream on top of the cake and made a little complaint. He ended up throwing the cake to the wall, which destroyed his little girl’s birthday party.

He explained that the intensity, anger, and frustration caused by PTSD can be easily dealt with through a focused situation such as in the battlefield. But at home, when veterans have to deal with different daily routine life issues, PTSD can easily spin out of control.

As his PTSD worsened, Robichaux eventually lost his position in the Marine Corps. He retired from the military, but he continued to suffer from PTSD.

In order to deal with his PTSD, Robichaux steered his focus toward martial arts. He became a third-degree black belt in jiujitsu and won the national championship of pro MMA (mixed martial arts) in 2010. However, the new title did not stop him from his suffering.

Jiujitsu fights became the new battlefield for Robichaux. They were able to keep him focused, and to shift his attention away from his family problems, but never able to help him recover from his severe PTSD.

Robichaux said that even when he won a big fight in front of an audience of 10,000, his mode would still go from the top of the spirit down to the bottom right after he finished the fight.

“I love the sport, and it is good to be busy. But I use [martial art fights] as a bandage, and I didn’t get well,” said Robichaux. His marriage life kept getting worse, and he and his wife separated shortly after he won the MMA championship. The couple sold their house and lived in different apartments.

“When we separated, my wife went to church and started praying for me,” Robichaux said, and he finally started realizing he himself was the one with the problem and causing the pain for his family.

Robichaux told The Epoch Times that many wounded warriors, continuously suffering PTSD after retiring from the military, have great difficulties dealing with their normal daily lives. They break things in front of their spouses, yell at their families, although deep inside their hearts their families mean so much to them.

“My family may be sad without me, but they will definitely be better without me,” Robichaux said. This thought was with him all the time and made him feel desperate and helpless.

Eventually, one day Robichaux sat in his closet, took his pistol, and pointed it at himself. He placed his family pictures in front of him to build some encouragement for himself, then put the gun into his mouth, and pointed to his head.

“The only thing that kept me from doing it [killing myself] is my oldest son. He was in my apartment.” Robichaux worried what his son might have to suffer through after seeing his suicide.

Robichaux still remembered when his wife, Kathy, knocked on his apartment door when he was in his closet, about to pull the trigger to kill himself. “I was trying to hide my gun just like a little kid who got caught [doing bad things],” Robichaux said.

“I don’t like to be called a quitter,” said Robichaux, and he didn’t want to be a quitter of a husband, a father, and a proud Marine. It was at that moment he decided to change himself.

Kathy insisted he start receiving counseling services from their church.

The road of recovery was never easy. But through the help of their church, the couple jumped through many hurdles, and were back together.

It was also based on their own successful experiences dealing with PTSD, that Robichaux and Kathy started Mighty Oaks, which has so far helped thousands of veterans who suffer from PTSD.

Kathy grew up as a woman who believed her life was to be a full-time mom, but her own experience helping her husband dealing with PTSD made her the co-founder of Mighty Oaks. Now she is an active member of Mighty Oaks helping wounded warriors.

The Mighty Oaks team is made of veterans, or family members of veterans. Their passion comes from three sources: their families, their faith, and their patriotism.

“Our Founding Fathers once said that the United States of America would only work if we have moral and religious people,” said former Congressman Allen West (R-Florida), who is a big advocate of Mighty Oaks.

Robichaux told the Epoch Times that many veterans who recovered from PTSD through the help of Mighty Oaks had previously participated various types of medical programs. They came to Mighty Oaks after other programs failed them.

Mighty Oaks’ specially designed peer-to-peer, and faith-based program has been continuing its success and achieving measurable results on treating PTSD with a solid record.

Based on reports from CNN in January 2019, the number of confirmed and suspected suicides in the active-duty Marine Corps and Navy reached a 10-year high in 2018.

The VA report also indicates that in 2016, the suicide rate was 1.5 times greater for the veterans than for non-veteran adults, after adjusting for age and gender.

However, the story of Mighty Oaks has been just the reversal of these reports: Since 2011, the success of Mighty Oaks programs has helped more than 2,600 veterans recover from serious PTSD.

“As commander in chief, I extend my personal gratitude to you for your distinguished and steadfast service to our country,” stated President Trump in a personal letter to Robichaux.

Trump also wrote in his letter: “Our nation depends on the selfless and courageous lives of our brave men and women in uniform. Veterans like you have helped America continue to shine as a beacon of hope and freedom.”