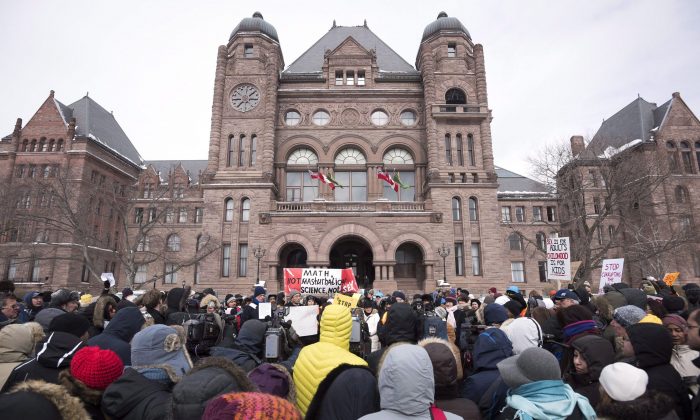 Demonstrators gather in front of Queen's Park to protest against Ontario's new sex education curriculum in Toronto on Feb. 24, 2015. (THE CANADIAN PRESS/Darren Calabrese)
The Reader's Turn

I feel there has been a lot of rhetoric and misinformation from both the pro and con sides in the sex-education debate. For example, the pro side has a point as some parents haven’t read the 2015 curriculum and you really should read it completely and get a full understanding before voicing objections.

As with those who are against it—and that would include me—there has not been an opportunity for substantial (in terms of numbers) open, honest, civil debate and discussion.

Such statements as “you haven’t read it,” “you’re homophobic,” or “it’s just a tiny minority of religious crackpots” are totally untrue and hardly help foster an open and honest discussion. Of course any sane person wants to protect our kids, but people’s faith and moral values must be respected because with this subject they go hand in hand and cannot be separated.

According to reports, 4,000 surveys were sent out to parents with just over 1,600 responses. That’s hardly representative of how Ontarians feel and nowhere close to “sufficient” in terms of consultation.

If the pro side has nothing to fear and believes so strongly in their position, then why would they be afraid of province-wide town hall meetings and submissions from parents?

Also, a final thought is that when it comes to such issues that are interwoven with both faith and personal morality, the parents should have the final say and not school boards or the state promoting a social engineering agenda.