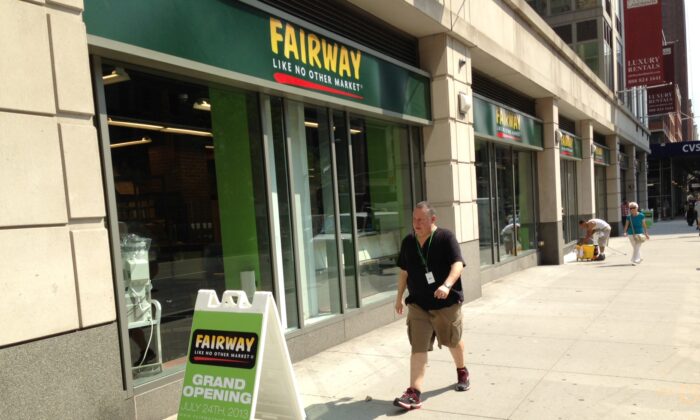 A photo of a Fairway in Chelsea New York City. It is opening on July 24, 2013 (Seth Holehouse/Epoch Times )
US News

Iconic Manhattan store chain Fairway filed for Chapter 11 bankruptcy protection early Thursday morning after a struggle to recover from debt after its prior bankruptcy in 2016. Village Super Market, a publicly-traded company and a member of the ShopRite food cooperative, offered to buy five of Fairway’s stores in Manhattan and its warehouse for $70 million.

The New York Post reported on Tuesday that Fairway was planning to file for a Chapter 7 bankruptcy which would have meant closing and liquidation of all its 14 stores. Fairway denounced this on Twitter the next day, saying, “Despite reports, Fairway Market has no intention to file for Chapter 7 or liquidate all of its stores. All 14 stores remain open for business, offering a complete range of high quality, specialty food products, and we look forward to seeing our customers and employees.”

Despite reports, Fairway Market has no intention to file for chapter 7 or liquidate all of its stores. All 14 stores remain open for business, offering a complete range of high quality, specialty food products, and we look forward to seeing our customers and employees. pic.twitter.com/eqiMFODBGW

Filling for Chapter 11 bankruptcy means that the company’s debt will be restructured and paid over a certain period while the business remains active. Fairways filed for Chapter 11 with a “stalking horse” agreement to sell five of its stores to Village Super Market (VLGEA), which currently owns around 30 ShopRite stores. Fairway also plans to find buyers for its remaining stores, Chief Executive Officer Abel Porter said in court papers, as reported by Bloomberg. The stalking horse deal will set the low bid for other potential buyers. [link]

In 2007, Sterling Investment Partners, a Connecticut-based private equity firm bought a controlling stake in Fairway, a chain supermarket founded in 1933, with stores in New York, Connecticut, and New Jersey, Bloomberg reported. The new owners had envisioned a rapid expansion of Fairway.

“We believe that the New York metro area can satisfy a Fairway food store count that would be well in excess of 30 to 35 stores,” Charles W. Santoro, managing partner of Sterling Investments Partners said in 2011, reported Wall Street Journal

When Fairway’s debt reached $200 million in 2012, the company, to raise capital, went public in 2013, reported Bloomberg.

Even so, the company was not able “to raise additional capital” or “improve its performance” which in turn impacted the company’s ability to “pursue its longer-term growth strategy,” Fairway reported in its regulatory filing in 2016, according to Market Watch.

At the same time, the emergence of new competitors in New York–Whole Foods and Trader Joe’s, together with changes to the consumer behavior pattern, including online grocery shopping, compounded Fairway’s financial difficulties. As a result, Fairway filed for Chapter 11 bankruptcy protection in 2016, reported Market Watch.

The company was able to reduce its debt through restructuring to $140 million, but it never fully recovered and had to file for bankruptcy protection again on Jan.23. Fairway is $211.5 million in debt, according to Bloomberg data.

Robert Sumas, Chief Executive of Village Super Market said, “If we are successful in our bid, we are committed to keeping Fairway, including its name, unique product selection, and value, a part of this community,” according to Wall Street Journal.