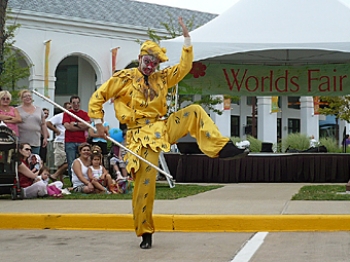 By Christine Lin
Print
NEW YORK—“Most people don’t realize that Queens is actually the most diverse county in the world,” said Dave Kerpen, the host of the Second Annual World’s Fair in Atlas Park Mall. “There are 100 different countries represented.”

To celebrate that diversity, sixteen performing groups representing cultures from all over the world congregated at the event at Atlas Park Mall in Glendale, Queens on Saturday, July 26.

The fair spans two weekends and is hosted by KBuzz, which works on creative marketing and events. KBuzz created the World’s Fair to help the shops at Atlas Park market to different ethnic groups, according to its web site.

“The big problem with this mall is that a lot of people don’t know about it,” said KBuzz’s Devin Sugameli, who lives 10 blocks from the mall. “When you say Glendale, they think it’s in Brooklyn or something.”

Enclosing a grassy open-air park, the mall offers a variety of clothing and beauty boutiques, German, Italian, and Japanese restaurants, a theater and fitness amenities.

The first store to open at Atlas Park is the Orange cafe. Its manager Joe Pacini welcomes the fair as a boon to his business. “Our business is up 50 percent since last Saturday,” Pacini said. “Today I got a lot of new customers that I haven’t seen before.”

The fair also featured 25 booths representing mostly banks and ethnic artists. Attendees received gift certificates to Altas Park stores as raffle prizes. Between performances, audience members were challenged to answer trivia questions about a song. Audiences are encouraged to vote for their favorite performers. At the end of each day, the most popular performing group receives a check of $1,000.

Last year’s World’s Fair attracted over four thousand people and is expected to attract more this year. The Fair continues next weekend at Atlas Park Mall.