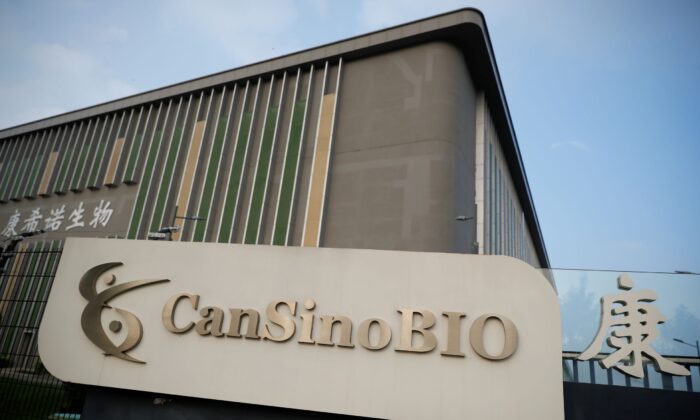 A logo of China's CanSino Biologics Inc is pictured on the company's headquarters in Tianjin, China, on August 17, 2020. (Reuters/Thomas Peter)
Canada

The federal government’s insistence on partnering with a Chinese vaccine company in the early stages of the pandemic led to a nearly two-year delay in producing a Canada-made vaccine, according to a new report.

The Canadian government waited months for a COVID-19 vaccine sample to arrive from China that never materialized, and wasted millions upgrading a facility that has never produced any vaccines, according to government documents obtained by CBC’s The Fifth Estate.

The documents show that in May 2020, the National Research Council of Canada (NRC) signed a collaboration agreement with the Chinese company CanSino Biologics to “fast-track” a COVID-19 vaccine for emergency use in Canada.

CanSino, which is affiliated with the Chinese Communist Party (CCP) and its military, was to ship the vaccines to Canada for further clinical trials that month.

The NRC had been preparing to manufacture the vaccines and committed $44 million to upgrade a temporary production facility in Montreal, even before the contract was signed, according to the documents.

But the CanSino vaccine would never arrive in Canada, as they were held up by China’s customs under suspicious circumstances.

A federal government memo reveals that days after Prime Minister Justin Trudeau made public the deal with CanSino on May 16, 2020, the Canadian Embassy in Beijing was still working with the Chinese customs to get the vaccines through, CBC reported.

“CanSino vaccines are still with customs in China,” the memo stated. “Embassy has a [meeting] tomorrow. Assuming they get through customs [tomorrow], they can be put on a flight on the 27th.”

But the vaccine samples never got through on May 27, which experts say was the result of political discord between Canada and China.

On that same day, Meng Wanzhou—the high-profile senior executive of China’s telecom giant Huawei—lost an appeal in the British Columbia Supreme Court fighting against her extradition to the United States. Meng was arrested in Dec. 2018 in Vancouver on a U.S. warrant to have her extradited on charges of bank fraud.

As of July 2020, the CanSino vaccine remained the single candidate approved by Health Canada for clinical trials in the country.

By Aug. 2020, the NRC had abandoned the CanSino project seeing that China wouldn’t allow the vaccines to come to Canada.

The Conservatives have criticized the Liberal government for partnering with the Chinese company in vaccine development, raising questions about security concerns and Canada’s slow vaccine rollout compared to other countries.

“CSIS [Canadian Security Intelligence Service] had been flagging CanSino as a national security threat for years, but the Liberals turned a blind eye to our Canadian experts,” Conservative Leader Erin O’Toole wrote in a Dec. 2020 commentary in the National Post.

The Liberals have defended their vaccine policy, saying that they had signed deals with other manufacturers before the CanSino partnership collapsed.

“We put all our eggs in as many different baskets as possible, and that is how we have the most diverse portfolio of vaccines and more doses potentially per capita than any other country in the world. We have been there for Canadians,”  Trudeau said in the House of Commons on Dec. 2, 2020.

Despite the stalled partnership, Trudeau announced in a press conference on Aug. 31 last year that the Montreal lab had been upgraded to produce the CanSino vaccines.

The Prime Minister’s Office also said the facility would “enable the preliminary production of 250,000 doses of vaccine per month starting in November 2020,” which never came to fruition.

To date, the NRC facility has not produced any vaccines for Canada, CBC reported.