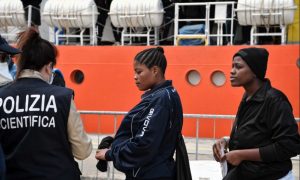 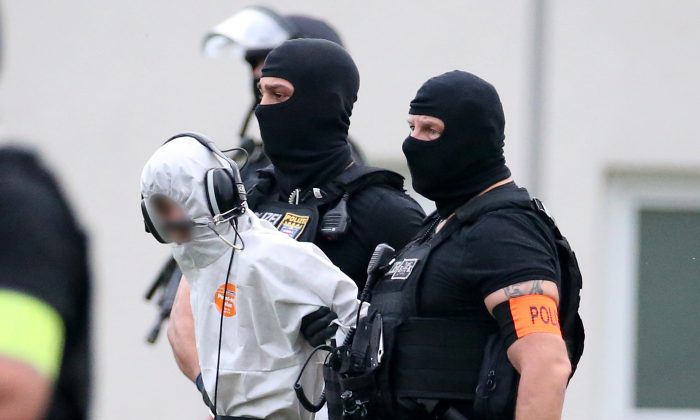 Police officers of a special unit escort Iraqi asylum seeker Ali Bashar, who is suspected of having killed a German teenage girl, to a helicopter in Wiesbaden, Germany, on June 10, 2018. (Hasan Bratic/AFP/Getty Images)
Europe

German prosecutors have announced child rape and murder charges against a rejected Iraqi Kurdish asylum-seeker in a case that sparked a heated debate about immigrant crime.

The horrific crime is alleged to have been committed in a wooded area near Bashar’s refugee shelter in the German city of Wiesbaden on May 23, 2018. An autopsy cited by Reuters revealed signs of a violent and sexual attack.

Bashar also stands accused of raping an 11-year-old girl twice—first after locking her in his room, and then once again in a supermarket parking lot.

AFP reported that prosecutors also charged an Afghan youth, identified only as Mansoor Q., in the rape of the 11-year-old girl. Mansoor Q. was believed to be aged at least 14 at the time of the assault.

Prosecutors said Ali Bashar’s younger brother—who is believed to be in Iraq, according to media reports—had also taken part in a violent sexual assault against the younger girl.

After the crimes were committed, Bashar fled to northern Iraq, and German authorities declared him a wanted fugitive and issued an arrest warrant.

“After we received his info and photos from the [German] Ministry of Interior, we searched for him in Zakho and found him very shortly in one of the neighborhoods in the city,” Duhok city police chief Tariq Ahmed told Kurdistan24. He added that Bashar had been interrogated and confessed to the murder.

“He admitted that he killed the girl,” Ahmed said, with expectations mounting that Bashar might be extradited to Germany and there face trial for the crimes.

Bashar was ultimately extradited in a mission joined personally by German federal police chief Dieter Romann, according to Bild Daily.

Ahmed told Kurdistan24 that Bashar told interrogators he and the German teen were friends who were “on a trip to the woods” where “they consumed a lot of alcohol and drugs.”

The suspect and the victim then reportedly got into an argument of an unspecified nature, the police chief said, prompting the girl to try to call the police.

The chief said Bashar told police that he was afraid of the consequences of being caught with illicit substances in the company of an underage girl, so he “choked her and buried her beneath the dirt.”

Feldman’s murder captured headlines in Germany, which become known as the “Susanna Case” and fueled debate over immigrant crime.

Public outcry over the crime prompted politicians to call for faster deportation of asylum-seekers who had committed crimes from Germany.

While overall crime in Germany has fallen to the lowest level since 1992, there has been an increase in violent crime committed by male immigrants between the ages of 14 and 30.

A German government-sponsored report from January 2018 showed that violent crime increased 10 percent between 2015 and 2016 in the German state of Lower Saxony. The study attributed 90 percent of the increase in violent crime to young male asylum-seekers.

The study also found that asylum-seekers arriving from war-torn regions were more likely to avoid trouble and that certain groups of immigrants, such as those from North Africa, tended to commit more crimes.

Around 17 percent of violent crimes in Lower Saxony that were attributed to refugees, for example, were suspected of being committed by North African asylum seekers. These make up less than 1 percent of the state’s registered refugee population and have relatively slim chances of obtaining legal status in Germany.

Bashar first arrived in Germany in 2015 along with his parents and five siblings, according to the Daily Mail.

He faced deportation after his request for asylum was rejected in December 2016, but he obtained a temporary residence permit pending his appeal.

Bashar had reportedly been known to police, including for fights, alleged robbery, and possession of an illegal switchblade.

In his upcoming trial, Bashar also faces charges for a park robbery in which he allegedly beat, strangled, and threatened a man with a knife to steal his watch, bag, phone, and bank card.