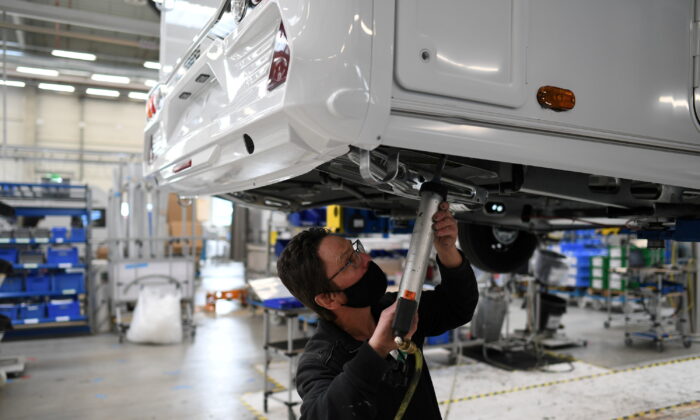 A worker assembles a vehicle at the Knaus-Tabbert AG factory in Jandelsbrunn near Passau, Germany, on March 16, 2021. (Andreas Gebert/Reuters)
Economy

A slowdown in factory growth across the United States, Europe, and Asia is strengthening fears of a global recession.

Backlogs of work fell for the first time in almost two years as eurozone companies focused on “completing unfilled orders due to falling demand.”

In China, factory activity showed signs of recovery in June, with the country’s manufacturing activity growing at its fastest pace in 13 months. However, the disruptions caused by Beijing’s COVID-19 lockdowns have affected several companies. Countries like South Korea, Japan, and Taiwan registered a slowdown in factory activity.

“There’s hope China’s economy will pick up after a period of some weakness. But now there’s a risk of slowdown in the U.S. and European economies,” Yoshiki Shinke, chief economist at Japan’s Dai-ichi Life Research Institute, said to Reuters. “It will be a tug of war between the two, though there’s a lot of uncertainty over the global economic outlook.”

In the United States, the Federal Reserve Bank of Atlanta is expecting the country’s economy to contract by a 1 percent annualized rate during the April–June quarter. In the first quarter, gross domestic product had fallen by 1.6 percent, the first quarterly drop since 2020.

Speaking at a webinar, Andrew Balls, the global chief investment officer for fixed income at PIMCO, predicted the chances of America slipping into a recession in the next 12 months as “probably more likely than not.” He put the probability of a recession close to 50 percent or higher.

“A recession is not the only important thing. You’re clearly going to see a significant growth slowdown,” Balls said. “The inflation profile in the short term is very important. Central banks are focused on inflation credibility.”

The state of America’s stock markets is also worrying investors, increasing fears of a recession. In the first six months of 2022, the S&P 500 fell by 20.58 percent, the Dow Jones Industrial Average declined by 15.31 percent, and the Nasdaq Composite Index tumbled by 29.21 percent.

This is the worst performance of the U.S. stock market in 50 years.