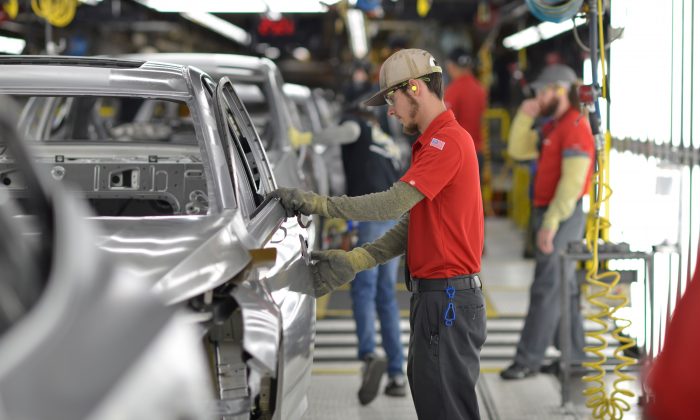 US Factory Activity Slows Less Than Expected in June

American manufacturing grew at a slower pace in June, but not as slow as economists predicted.

The Institute for Supply Management (ISM) said its index of national factory activity dropped to 51.7 in June, the lowest reading since October 2016, from 52.1 in May. A reading above 50 indicates expansion in the manufacturing sector, which accounts for about 12 percent of the U.S. economy.

Economists polled by Reuters had forecast the ISM index to fall to 51 in June.

Trade talks between the United States and China stalled in May after Beijing backtracked on commitments to address structural issues with its economy, such as intellectual property theft, government subsidies, and forced technology transfers. That prompted Washington to raise tariffs on $200 billion of Chinese goods; the Chinese regime raised tariffs on $60 billion in U.S. goods in retaliation.

The trade dispute seems to have taken a positive turn, when on June 29, President Donald Trump said that he and Chinese leader Xi Jinping agreed to resume trade talks.

Trump said he agreed not to impose further tariffs on $325 billion of Chinese imports while the negotiations were ongoing. He also announced easing restrictions on Chinese tech company Huawei.

Stocks rallied July 1 on the news. The benchmark S&P 500 index briefly rose to 2,977.93 and surpassed its previous record high set on June 21, before giving back some gains.

“Any step toward a trade resolution—and it doesn’t have to be a lot of progress—just a step, is viewed very positively by markets,” said Scott Brown, chief economist at Raymond James in St. Petersburg, Florida. “And investors at this point are trying to focus on the positive in hopes that there will be some trade resolution down the line.”

New Orders Down, Jobs Up

Manufacturing took a hit from an inventory overhang, which has resulted in businesses placing fewer orders with manufacturers. A reduction in the production of Boeing’s MAX 737 aircraft, which was grounded in March following two fatal plane crashes in five months, is weighing on activity.

The ISM’s new orders sub-index fell 2.7 points to a reading of 50 in June, the lowest reading since December 2015. But factories reported hiring more workers, with a gauge of manufacturing employment rising to 54.5 from 53.7 in May.

The job market has been one of the most solid markers of the economy, despite May’s slowdown in growth. The economy expanded by 75,000 jobs in May, which was less than expected, but the unemployment rate has remained at 3.6 percent—the lowest since December 1969.