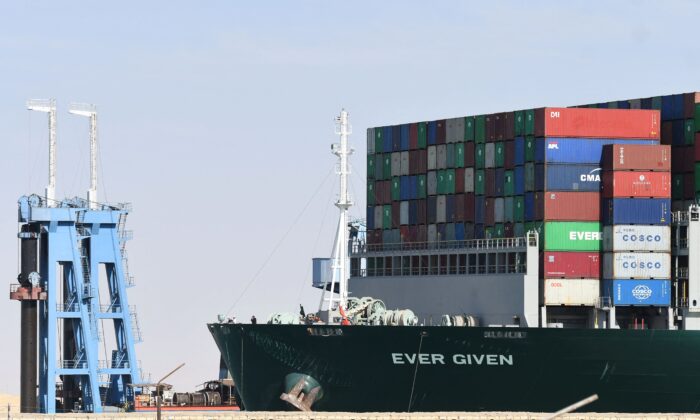 The Panama-flagged MV 'Ever Given' container ship after being fully dislodged from the banks of the Suez Canal, near Suez city, on March 29, 2021. (Ahmad Hassan/AFP via Getty Images)
China

Global rates for large bulk carriers have plunged by 90 percent from last year’s peak. Spot prices for capesize (largest class) bulk carriers fell to $5,826 a day at the end of January, their lowest level in 20 months and well below a 12-year high of $80,000 in October 2021. Bulk carriers mainly carry iron ore, coal, food, and grain.

According to Davy Jun Huang, chief economist of China Enterprise Capital Alliance and executive director of Asia Real Estate Association and Research Committee, one factor resulting in the collapse in bulk carrier prices is falling steel demand in China. The lower demand for steel is due to Beijing’s environmental protection order for the Winter Olympics.

“The Winter Olympics are being held in Beijing. Nearby provinces like Hebei are major steel-making regions. A lot of steel plants have temporarily closed or reduced production due to environmental concerns,” Huang told The Epoch Times.

Cities in the Beijing-Tianjin-Hebei region and surrounding areas are required to meet targets for controlling the average concentration of PM2.5 (particulate matter) and the number of days with severe or higher pollution levels between Oct. 1, 2021 and Mar. 31, 2022, according to a draft plan released by China’s Ministry of Ecology and Environment.

Chinese media and industry interpreted the environmental protection order as a six-month “stop work order” to protect the Olympics.

China Coating reported on its website (icot.cc) that in the run-up to the Winter Olympics, a six-month “stop work order” for environmental protection will be carried out from the fourth quarter of 2021 to the end of March 2022, covering 65 cities in seven provinces. It means that heavy industries in more than half of China’s provinces and regions face production disruption. In addition, officials have launched an enhanced 67-day “stop work order” for a dozen areas in Hebei Province, including Tangshan, Shijiazhuang, Zhangjiakou, Chengde, and Tianjin.

South Korean media ETnews reported that Chinese authorities ordered factories in Beijing and nearby cities to cut production ahead of the Winter Olympics, prompting South Korean companies to put their Chinese factories in an “emergency state.”

Another reason for the slump in freight prices is the extraordinary surge in these prices last year, Huang said.

“Why is the decline so dramatic, reaching 90 percent? It’s because of the pandemic, which caused piers to be jammed frequently. Many ships went in and couldn’t get out, so there were no empty ships to transport,” he said.

According to Nikkei Asia, “Chinese ports experienced significant disruptions at their ports in mid-2021 owing to COVID-19 entry restrictions and bad weather that hampered unloading. That, in turn, restricted the availability of bulk carriers and sent prices soaring. But the number of stalled ships waiting off the shores of China has since been reduced by 40 percent, according to IHS Markit, signaling an easing of capacity constraints.”