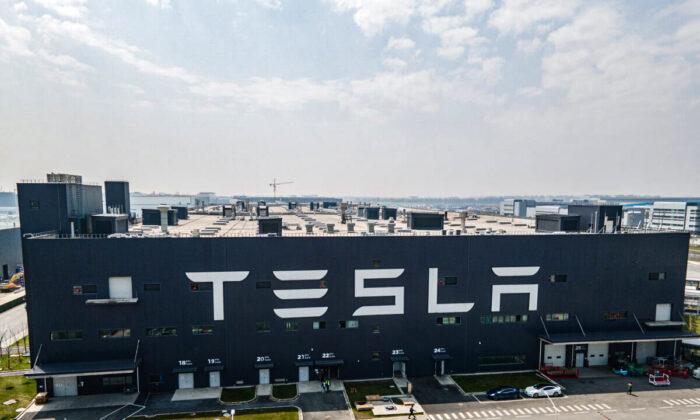 The Tesla Shanghai Gigafactory in China on March 29, 2021. (Xiaolu Chu/Getty Images)
INSIDE CHINA

Factories in Shanghai Struggling to Resume Production Under Lockdown

Workers are unable to get back to work
By Alex Wu

Shanghai has now been locked down for a month under the Chinese communist regime’s “zero-COVID” policy.

Recently, Shanghai authorities have been pushing for the resumption of production in manufacturing, but the progress has been slow, and some enterprises are having difficulty resuming work under the indefinite lockdown, as workers are unable to get back to work.

Residents in Shanghai said that the damage to the economy will be long-lasting.

Chinese officials recently also claimed that a “dynamic clearing” COVID-19 pandemic control policy and economic development are not in opposition to each other.

On April 22, Shanghai officials said that 70 percent of the 666 whitelisted key enterprises have resumed work and production. But U.S. and European companies in Shanghai say they still face severe logistics and labor shortages under the lockdown.

Bettina Schoen-Behanzin, the European Union Chamber of Commerce in China’s vice president and Shanghai chair told CNBC in a statement that although a “significant” number of members of the chamber are on the whitelist, “many companies still face the challenges of labor shortages and logistical difficulties,” estimating that less than 30 percent of members’ workforces are eligible to return to work because of the lockdowns.

A resident with the surname Wang in the Pudong district of Shanghai told The Epoch Times on April 30 that most companies in the city have not yet resumed work and production, despite the government’s order.

“The reason is that when you are locked at home, how do you resume work and production? It’s not open yet, what about the round-trip traffic? No bus, no subway. For example, a tobacco company, they say that the factory sends vehicles to pick up employees to work, but some communities don’t let people out. It’s very troublesome anyway,” he said.

Che Yunan (a pseudonym), an employee of Shanghai Electric Power Company, said that Shanghai has not yet returned to normal. “We have been issued a notice here that it would be possible to open on May 2. But if new cases are found in the community, they will postpone the lift of lockdown,” he said.

Che’s company has been locked down since the end of March. He said that people who have resumed work in the company are those who had been locked in the factory since then, and others were not allowed in.

Quanta (Shanghai) Computer Co., Ltd., which produces Tesla accessories and Apple laptops, is one of the first batch of 666 whitelisted enterprises in Shanghai to resume production. The company has eight factories in Shanghai and about 40,000 employees. Production was officially resumed on April 20. At present, its F1 and F3 factories have gradually resumed work, with about 15 percent of the workers returning.

The company’s employees revealed to The Epoch Times on April 19 that COVID-19 broke out in the dormitory of the company’s subordinate factory, thousands of workers were infected, and the employees were silenced by the factory when they sought help from the outside world.

The company’s production resumption plan, obtained by The Epoch Times, shows that the company’s COVID-19 cases “are not included in the social COVID-19 dynamic clearing plan,” which means the company’s cases are not counted in the official data of Shanghai. Lu Yong (a pseudonym), an employee of the company, told The Epoch Times on April 29 that the infected cases in the factory were counted at the beginning, but “there are too many infected people here, at least 10,000 now, so they are not reported anymore.”

On April 29, Liang Wannian, the expert group leader of the Chinese regime’s National Health Commission’s pandemic response team said that “dynamic clearing” COVID-19 pandemic control policy, economic development, and normal production and life are synergistic and do not oppose each other. “Zero-COVID” effectively protects and promotes economic development, and effectively guarantees the normal production and life of the people, he claimed.

Wang questioned the official’s claim, saying: “How can they synergize with each other? I don’t understand. Everyone is locked in the community, at home, how can you synergize? He is just shouting slogans. It is impossible to clear COVID-19 cases.”

“How can we get enough food from the government under the lockdown? How can they ensure the normal life of the common people? It [the regime] wants to resume production, and everyone is stuck at home, how to resume production and how to coordinate development? It’s just a slogan, he hasn’t done any social investigation at all, just talking nonsense in his office. Only when he goes to the factory and the community to see the life of the common people, he has the right to speak,” Wang said.

Gu Qinger, Gu Xiaohua, and Luo Ya contributed to the report.