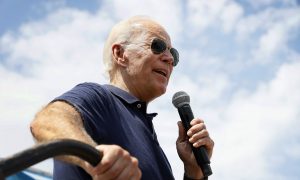 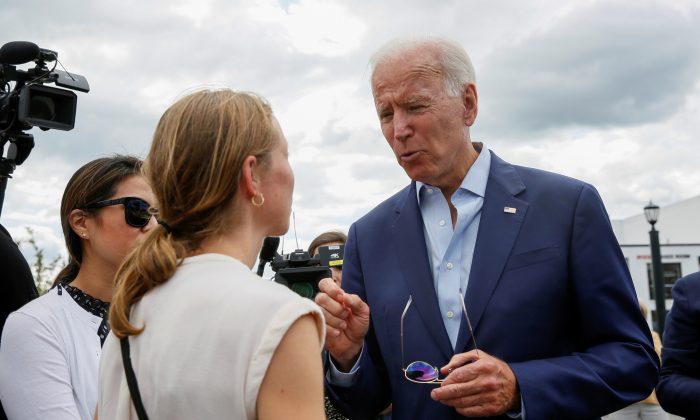 A reporter claimed on Aug. 26 that former Vice President Joe Biden told a supporter in New Hampshire that he left college with “$280,000 in debt” but the video appeared to show him referring to paying for his children’s schooling.

Biden, 76, has made a host of misstatements amid memory lapses in recent weeks but this instance appears to have been misrepresented. He did mistake the type of college at which he was speaking.

Paul Sperry, an investigative reporter, wrote on Twitter: “Biden told a supporter after Keene State College (N.H.) stump speech yesterday that he came out of college with ‘$280,000’ in debt, but then just moments later, he told another supporter that his debt was ‘over $300,000.'”

The tweet was picked up by several websites, including Steven Crowder, Red State, and Twitchy.

BREAKING: Biden told a supporter after Keene State College (N.H.) stump speech yesterday that he came out of college with “$280,000” in debt, but then just moments later, he told another supporter that his debt was “over $300,000”

C-Span video footage, though, showed that Biden had just moments earlier referred to how expensive it was to put his children through college.

“I go to school here … I was just wondering if you would promise me, standing here, where we let you come, that you wouldn’t forget about college students when you get into office,” a student asked Biden.

“No, I don’t forget college students. I have three in college right now, I put three kids through college and graduate school, I ended up with a debt of over $280,000. I get it. I’ve forgotten more about it than you’ll ever know.”

Biden before saying that if he were elected, he would cut down on interest students have to pay on their debt, including not paying for interest if their debt goes “beyond $30,000.”

It wasn’t clear if that was the moment Sperry referred to as “$300,000.” The rest of the 90-minute video didn’t appear to include another similar statement.

That’s clearly false, according to this video of the exchange: https://t.co/xdvVXvw4mh He said he accrued that debt putting “three kids through college and graduate school.”

Intercept reporter Robert Mackey first noted the discrepancy, telling Sperry: “That’s clearly false, according to this video of the exchange. He said he accrued that debt putting ‘three kids through college and graduate school.'”

Sperry did not respond to Mackey or queries from The Epoch Times and his original tweet remains on Twitter.

Biden did make several mistakes while speaking in New Hampshire, including at the university, Keene State College.

Biden was asked by reporters during the visit to Keene what he thought about the town and he mistakenly stated it was in Vermont, not New Hampshire.

“What’s not to like about Vermont in terms of the beauty of it? And what a neat town,” Biden said. “This is sort of a scenic, beautiful town, the mayor’s been a good guy, and everybody’s been really friendly.”

After struggling to remember where he’d spoken earlier in the day during the same trip, Biden told supporters: “I’m not going nuts.”