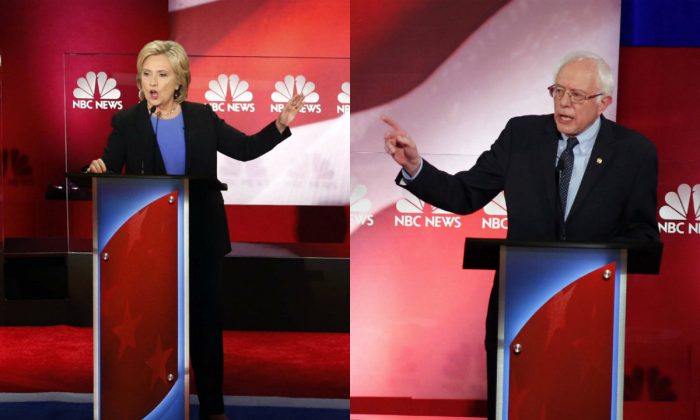 WASHINGTON—Let’s take a look at some of the claims Democratic presidential candidates Bernie Sanders and Hillary Clinton made during their Sunday debate and how they compare with the facts:

SANDERS: “We’re not going to tear up the Affordable Care Act,” but build on it.

THE FACTS: Sanders’ plan would indeed mean a radical change in direction—one that makes the government the payer of health care for everyone, not just for the elderly or the poorest Americans or members of the military.

Whether that means building on President Barack Obama’s health care law or ripping it up may be a semantic argument. But at the core, Sanders would switch the country away from a private health insurance system. Employees, employers and others would pay higher taxes in return for health care with no premiums or deductibles, a departure from the subsidies and conditions that Obama’s law has overlaid on the existing system.

A the same time, even “Obamacare” faced, and continues to face, massive opposition (majority of Americans disapprove of the law, according to a November Gallup poll) and a taxpayer-paid system was a no-go for Congress even when Democrats were in control. (Clinton ran into the issue when she proposed an overhaul of health care as first lady under her husband’s administration.)

Clinton’s team and her supporters have persisted in an argument that Sanders would wreck Medicare and other health-care entitlements with his proposed overhaul. It would do so in the course of establishing a health care system in which traditional Medicare, Medicaid and more would no longer be needed—because the government would be insuring everyone.

She made that argument herself in an earlier debate but did not repeat it Sunday night.

CLINTON: “One out of three African-American men may well end up going to prison. That’s the statistic.”

THE FACTS: Current data paint a different picture. Clinton isn’t the only person to use this ratio. Sanders has said nearly the same thing. Both drew on 13-year-old data that stated this as a projection, not a fact.

A 2003 report from the Bureau of Justice Statistics said, “About 1 in 3 black males, 1 in 6 Hispanic males, and 1 in 17 white males are expected to go to prison during their lifetime, if current incarceration rates remain unchanged.” But it went on to say that at the time, 16.6 percent of adult black males had actually ever gone to prison, or 1 in 6. The incarceration rate for black men has gone down since then, according to the Sentencing Project.

SANDERS: “I have a D-minus voting record from the NRA.” ”I have supported from Day 1 an instant background check,” as well as a ban on assault-type weapons.

CLINTON: “He voted against the Brady bill five times,” as well as for allowing guns in national parks and for shielding the gun industry from lawsuits.

THE FACTS: Both are singling out aspects of Sanders’ record, but that record is nuanced. Sanders supported an instant background check, and at certain points a three-day waiting period. But he opposed longer waiting periods—of five or seven days—which gun control advocates see as a more effective way to flag people who should not be getting a gun.

Clinton is right that he opposed various versions of the Brady bill with longer waiting periods. But his poor marks from the NRA reflect a record that does lean toward stronger gun controls. Sanders now says he would support exposing gun makers to lawsuits.

CLINTON on effects of Obama’s health care law: “We now have driven costs down to the lowest they’ve been in 50 years.”

THE FACTS: Not so. Health care spending is far higher than a half century ago. If she instead said that the rate of growth of health care spending year to year is lower than it’s been in 50 years, it would be closer to the truth, but still not right.

The government reported in December that health care spending in 2014 grew at the fastest pace since Obama took office, driven by expanded coverage under his law and rising drug prices. Not only that, but health care spending grew faster than the economy as a whole, reaching 17.5 percent of GDP. That means health care was claiming a growing share of national resources.

This was after five years of historically low growth in health spending—the decline Clinton may have based her comment on. But the lull in health care inflation was attributed in large measure to the recession that Obama inherited and its aftermath, not his law. And part of the reason health spending increased after that was because of the economic recovery.