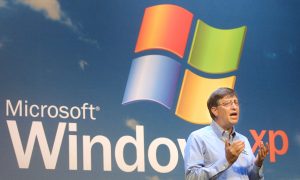 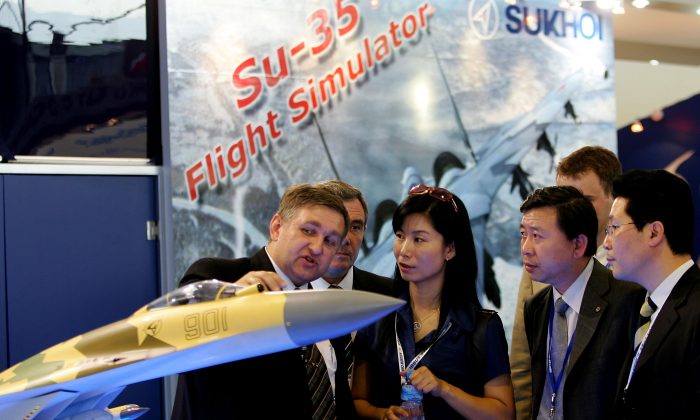 A man describes the Russian Su-35 fighter jet to Chinese visitors at Airshow China 2006 on Nov. 1, 2006 in Zhuhai, China. The Chinese regime is expected to sign a deal with the Russians to obtain the Su-35 next year. (Guang Niu/Getty Images)
China

China may soon be getting its hands on one of Russia’s core fighter jets, the Su-35. The purchase will bring China as close as it can get to challenging America’s modern air fleet.

China’s push for the Su-35 tells something about the capabilities of its air force and the regime’s struggles to manufacture state-of-the-art equipment. The need for the Russian fighter is part of a trend seen in China’s military, which still relies heavily on foreign imports and stolen designs.

With this purchase, history is repeating itself. In the 1980s China began developing its J-10 fighter jet. It put a prototype in the air in the 1990s, yet, after facing frequent setbacks, China turned to Russia. In 1992, China purchased 50 Russian Su-27s, and since then has turned to Russia to fill orders for fighter jets and jet fighter/bombers.

According to Global Security, “The acquisition of Su-27, after China had attempted for years to develop the J-10 aircraft with equivalent technology to perform similar functions, demonstrates a lack of confidence in domestic industrial capabilities.”

Not until late 2006 did China complete its J-10, but even so the plane relies on Russian parts—particularly its engines.

In developing its fifth-generation fighter jet, the J-20, China again ran into problems. Facing frequent setbacks, it has again turned to the Russia for the next best thing, this time the Su-35.

Fighter jets are categorized by generation. The Su-35 was one of Russia’s last fighters in the fourth-generation (classified as the 4.5-generation).

Yet the world is now moving toward fifth-generation fighter jets. America has the F-35 and F-22, Russia has the T-50, and China has the J-20. The United States has also made its F-35 fighter available to its allies.

The Russian Su-35 is arguably one of few 4.5-generation fighter jets that can challenge the American F-35. The two planes have similar capabilities, although defense analysts have pointed out that the F-35’s key to victory is its advanced stealth.

While China has done all it can to promote the J-20, an expected completion date of sometime between 2017 and 2020 suggests the project is now just for show. By 2020, the United States is expected to be well into the development of its next-generation of fighter jets.

The most fundamental problem is that China is not capable of building engines for a fifth-generation fighter jet. It imports AL-31FN engines from Russia, and even its attempts to counterfeit the Russian engines have turned up dry.

In 2010, China announced it would begin manufacturing the engines itself, using its knock-off version of the Russian engine, the WS-10A, according to the StrategyPage website. Yet, just a year later it quietly renewed its orders for the Russian engines.

Chinese officials even publicly called out the regime’s state-owned aviation company, Aviation Industry Corporation of China. StrategyPage states that in China, “The public debate points to the continued inability to even achieve the lower (than in the West) manufacturing standards of Russia, whose state-run firms (during the Soviet period) were also never able to match Western standards.”

Even the J-20, itself, is suspected to be a knock-off of the defunct Russian MiG-1.44. Cross-comparisons between the J-20 and the MiG-1.44 show the designs are very similar.

An unnamed Russian Ministry of Defense official told Reuters in 2011 that it appeared the Chinese gained access to documents related to the jet. An independent analyst also told Reuters “China bought the technology for parts, including the tail of the Mikoyan, for money.”

Russian plane manufacturer MiG denied it transferred technology to the Chinese, according to Ria Novosti. Yet, Douglas Barrie, an air warfare specialist at the London-based International Institute of Strategic Studies told Ria, “If it’s a coincidence, it’s a striking one. Russia may have provided technical support, but there is nothing substantial to prove that. China has however relied on Russia for much of its defense procurement for a decade and a half.”

Despite the regime’s claims about the J-20’s advanced stealth features, Chinese stealth capabilities are questionable.

China incorporated stealth features into the MiG-1.44 design, and there are varying reports on where it received its stealth technology. Some point to cyberespionage on the F-22 program, some toward cyberespoinage or purchases from the Russians, and some toward an American stealth F-117 Nighthawk that was shot down over Serbia in 1999.

A key problem for the J-20 is that while the MiG-1.44 was a stealth fighter, it was designed for earlier generations of stealth technology.

Advanced stealth features go beyond mere design. A complex coating that can absorb radar is required, as well several other features including technology to hide energy emissions, reduce turbulence, and lower heat radiation.

David Axe, an American military correspondent, also notes on his “War is Boring” blog that the J-20 apparently lacks stealth nozzles to evade radar detection from behind. He also notes that it uses “canards,” which are small moving wings often used as “bolt-on” fixes that “add radar-reflecting edges.”

“The [People’s Republic of China] with respect to stealth capability, they are behind us, but they will develop and they will get better, and we certainly can’t rest on our position,” Air Force Gen. Herbert Carlisle, commander of U.S. Pacific Air Forces, said in 2012, according to DefenseTech.

Perhaps because China relies for its most advanced technology on foreign imports and on stealing designs from other countries, its own research and development in fighter planes has been unsuccessful. This seems to be the lesson of the J-20.