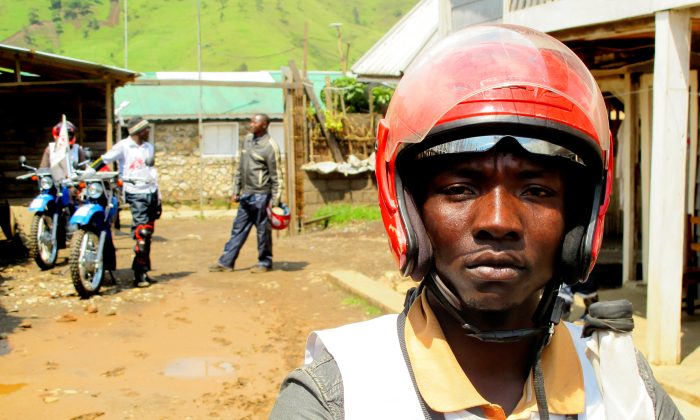 Medcins sans Frontieres motorcyclist Akonkwa Kacihambra takes the sick to the hospital no matter how challenging the situation in the Democratic Republic of the Congo. [Pau Miranda/MSF]
Africa

Facing Danger to Save Lives in Democratic Republic of the Congo

The medical charity Médecins sans Frontières (MSF) works in some of the most challenging places on earth, where a lack of access to healthcare is commonplace. In the Democratic Republic of the Congo (DRC), there is less than one hospital bed per thousand inhabitants and slightly more than one doctor per 10,000 people. These indicators are some of the worst in the world.

A lethal combination of armed conflict outbreaks and a skeletal healthcare network, mean MSF’s work can be extremely hazardous.

A team of local workers in South Kivu province are helping others to access health centres and hospitals on motorbikes. These bikers are essential as they bring medical care to tens of thousands of people who otherwise would remain without assistance. Akonkwa Kacihambra is one of them.

Akonkwa Kacihambra has been working as a motorcyclist for MSF for the past two and a half years in the Minova district in South Kivu province.

His job is to get the sick and injured to the nearest hospital or medical centre, no-matter-what, whether it’s up a freezing mountain, or across harsh uneven terrain.

“Driving a motorbike and taking sick people to hospital here in the DRC is quite challenging. We cover a very big area, and the terrain is often hard to negotiate but using the motorbike is often the best and the only way,” says Akonkwa Kacihambra.

“Sometimes we have to climb quite high into the mountains, up to 2,200m in altitude, to pick people up, and it gets extremely cold. So basically, every situation is different and needs a different approach,” he says.

To add to the geographical difficulties, Kacihambra has also had to dodge bullets and grenades. He says the only way to confront situations like these is to remain professional and just do whatever he can to get people to the safety of the nearest hospital.

“Sometimes, people are very badly injured or sick and we have to get advice as to how best to deal with the situation.”

“Once a grenade exploded in a village and injured many people and we had to find a way of getting them all to hospital and we had to use help from all different sources. We had some medical help, but not nearly enough, yet we still managed to get everyone to safety. Despite some serious injuries, we found out that everyone had got better and that gives me a lot of satisfaction.’

MSF usually sends medical support with the riders, to help them assess how to deal with a medical emergency situation. The riders have to listen and follow the advice of the doctors, who also tell them the best way of keeping the patient safe during the journey.

Kacihambra’s most memorable moment and a story he says will stay with him always, was when he had to take a heavily pregnant lady to hospital. In this case, no medical support was on hand as it wasn’t considered to be a medical emergency.

“This is one of the happiest stories for me. I don’t know whether it was ‘lucky’ or ‘unlucky’, but we were obviously too late and she ended up giving birth before we got to hospital. I was so happy to help this lady. Fortunately we had someone with us who had experience delivering babies…and I was very relieved and proud to be able to transport both mum and new-born baby to hospital safely.”

Kacihambra says despite all the difficulties he loves his job. He admires how the humanitarians work selflessly for other people. So when he was given the opportunity to sign a contract with MSF, he didn’t hesitate.

“I like it that we have to put ourselves to one side and think about how we are going to save other people in extremely challenging situations.”

Many people don’t have cars or motorbikes in this area of the DRC, so Kacihambra says reactions can vary when they see him arrive.

“Some are afraid and we have to get our community health workers to help convince the sick or injured people to go with us. Eventually they understand it’s for their own good. Others just want to get on the bike, but that’s not always the best way to transport them and we have to listen to medical advice. It’s not even a choice most of the time. It’s about saving their life.”

Kacihambra knows he and his team are responsible for helping to transport hundreds of people to safety in the last six months.

“And that’s simply fantastic,” he says.