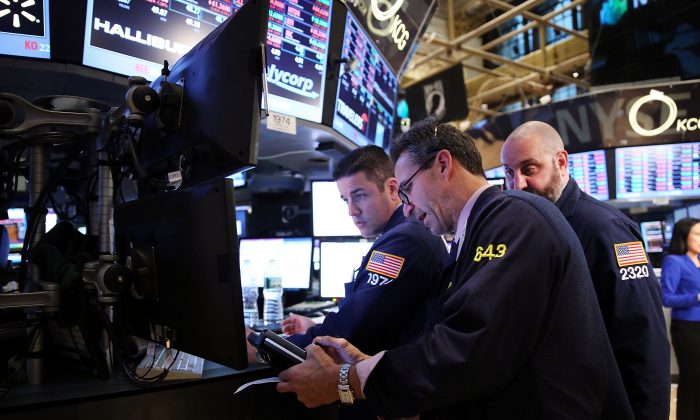 Traders work on the floor of the New York Stock Exchange at the end of the trading day in New York City on Feb. 3, 2014. The global economy is facing new threats it is unable to defend against. (Spencer Platt/Getty Images)
Business & Markets

It was around that time when Bradley was approached by Amar Manzoor, founder of 7Tao, a UK-based company that trains businesses in the art of industrial warfare. Bradley decided to give Amar’s program a shot, and he said “it was transformational to businesses” in the United Kingdom.

7Tao was designed to replace and go far beyond Six Sigma, which is a set of techniques and tools for business improvement. The system, designed in 1986, is the current standard used by most Western companies.

Most people don’t even consider they’re in the game, let alone a war of strategy.
— John Bradley

Many businesses are having trouble with Six Sigma, however, since the nature of global competition changed dramatically in 1986. Bradley said in an interview, “[7Tao] can outperform Six Sigma, completely, because it’s looking at all the internal and external elements of a business. I don’t think there is anything out there that even comes close to it.”

“Most people don’t even consider they’re in the game, let alone a war of strategy,” Bradley said.

According to Manzoor, in a new business environment shaped by the threats of Chinese espionage, cyberattacks, and cheap manufacturing, he and his team designed 7Tao to allow Western companies to stay in the game without sacrificing their values.

“We are in the center of an industrial war—the war for industrial dominance,” Manzoor said, in a phone interview.

The global economy has been in an unusual state for several decades, and this environment will soon change, according to British author and economic commentator Fred Harrison.

After World War II, the Western economy was able to dominate the global market because “they had no real competition,” Harrison said in a phone interview.

It was a global economy, which excluded Russia and Eastern Europe, which was then ruled by the Soviet Union, as well as communist China. Africa, South America, and Southeast Asia had very small footprints.

In this environment, companies in the United States and Western Europe were able to fire ahead “with no real competition,” Harrison said. “Today we’re in a very different situation. Western economies are under threat by China and India in ways they have never been before.”

The global economy has been in an unusual state for several decades, and this environment will soon change.

Harrison said, however, that 7Tao could change this dynamic, noting “It lives up to what’s on the tin, as it were.”

7Tao works by changing the business culture, and while it’s designed to compete with modern Chinese business practices, it ironically pulls its attack and defense methods from ancient Chinese martial arts.

Its founder, Manzoor, holds four black belts, including in Wing Chun Kung Fu and in Shaolin Kung Fu. In a way similar to how the classic book on Chinese military strategy, “The Art of War” is used by many to understand business competition, Manzoor has used his knowledge of traditional martial arts to build a deeper system for industrial warfare.

The world of global business has become a hostile place, and business leaders are likewise faced with a tough reality. Nation-states are stealing their intellectual property, foreign militaries are attacking their employees and networks, and state-run companies unbound by international law, are stealing their markets on an unprecedented scale.

Economic theft costs the United States an estimated $5 trillion each year, when the total economic value of innovation and lost jobs is factored in, according to Casey Fleming, CEO of BLACKOPS Partners Corporation, whose company provides intelligence and cyber strategy to the Fortune 500.

“Every American family feels the effects through lost jobs, higher prices, and lower stock prices. CEOs and boards are now dealing with a growing crisis they have no history or experience with,” Fleming said. “It’s an entirely hostile environment that has been rampant for years.”

BLACKOPS operates Manzoor’ s 7Tao exercises under its Spectre program, which it provides to C-level executives of Fortune 1,000 companies. Fleming said in their experience, 7Tao has been able to increase productivity, empower employees, build teams, and “provides 360 degree awareness.”

According to Manzoor, the reality in global business is that many players “follow no rules, no regulations, and no laws—they are out to destroy their competitors’ transactions.”

Manzoor notes the Chinese regime is one of the biggest players in industrial warfare, and the fact that it doesn’t abide by international rules places unprepared businesses in a delicate state.

“China depends on industrial espionage, forced technology transfers, and piracy and counterfeiting of foreign technology as part of a system of ‘innovation mercantilism,'” states a report from the U.S.–China Economic and Security Review Commission.

By using unethical means, the report states, the Chinese regime is able to “avoid the expense and difficulty of basic research and unique product development by obtaining what it needs illegally.”

Its cyberattacks and insider espionage used for economic theft are run under the warfighting branch of the Chinese military, the General Staff Department. Its operations are likewise guided by state policy, particularly Project 863, which according to a report from the Office of the National Counterintelligence Executive, “provides funding and guidance for efforts to clandestinely acquire U.S. technology and sensitive economic information.”

Naveed Aslam, principal software engineer at Rolls Royce, said in a phone interview that “We’ve become so accustomed in society to playing by Queensberry rules and having a level plane for doing business.”

He said the 7Tao system has helped companies see “how business is being done in other parts of the world, where the rules of business no longer apply.” He noted, “we need to be aware of techniques others may use, even if you’re not using those techniques yourself.”

According to Greg Sneddon, a former director of Johnson Matthey, 7Tao “seems to change the culture of the whole business.”

“Most of these programs are connected to money,” he said, in a phone interview. “A lot of improvement programs in manufacturing are based on the product, but his is based on the business processes, which come down to money at the end of the day.”

Prakash Patel, lean coordinator for Altro Floors, said the system “takes the word of the people from the bottom up.” He said that under this new culture, “They feel valued because they’re contributing.”

The difference between 7Tao and the systems used by the Chinese—and even many businesses in Western world—are similar to the differences in military command structures used by communist systems, compared to those of democratic countries.

A communist command structure is purely top-down, where individuals at the bottom have little or no say. As a bit of a joke, if a Soviet-trained soldier was told to march and ran into a wall, he would keep walking into that wall until told to march around it.

In the United States, military command structures are much different. Intel gathered from the ground is fed toward the top, and this information is used to direct the broader strategy. It’s a system that makes greater use of information that’s otherwise only known by the people on the ground.

Many businesses today, however, use the communist-style management structure, where orders move only top-down and information known at the ground level falls on deaf ears.

According to Alex Hawkridge, chairman at Izone Driver Performance Ltd. and the former boss of the Toleman Formula One Team, the difference this new culture creates for businesses is profound. He has been using 7Tao for close to 10 years.

“I’ll buy a company that’s dying, introduce 7Tao on the defense side, and things massively improve within the first several weeks,” he said, in a phone interview. “People see such a huge amount of waste they can deal with. It’s astonishing how fast it gets a grip.”

“It’s not called communism. It’s the absolute opposite. It’s called democracy. You’re giving everybody the power to find what they need through 7Tao,” he said.

Nobody has ever had a company where every employee is given the ability to attack and defend on behalf of the company.
— Alex Hawkridge, chairman, Izone Driver Performance Ltd.

As part of the Industrial Warfare trainings for 7Tao, employees at every level of the company are brought together and made to compete on a mock project. They’re given a toolset of attack and defense techniques, and this helps to start thinking along the lines of global economic competition.

The legacy this creates is that when employees see problems, they’re able to use the 7Tao system to “pursue a solution themselves, because they have the solution,” Hawkridge said. “Such a thing has never existed before. Nobody has ever had a company where every employee is given the ability to attack and defend on behalf of the company.”

“It’s not asking anybody on a shop floor to do more work,” Hawkridge said. “It’s asking them to be aware and think about the defense of a company and how to attack competitors, and how to increase the number of transactions.”

“It is astonishing how fast it works, and you don’t have to get rid of people,” he said.