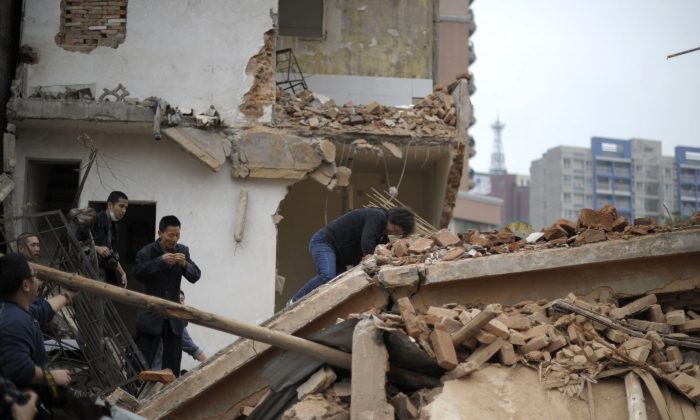 When encroaching developers came to demolish their property, villagers in the Chinese province of Shandong fought back with what online comments are calling a “mortar.”

A 70-second video posted on Sept. 11 to Sina Weibo, a Chinese social media platform, shows  men firing dozens of projectiles at a team of construction workers and their excavators. Some workers can be seen taking cover as the burning-hot rounds whizz by.

Chinese land developers, who often enjoy connections to powerful political or business contacts, are notorious for forcibly expropriating the rural poor from their property while providing little compensation. In the rapid growth-driven Chinese economic landscape, whole communities can be razed to make way for new projects.

Details of the feud and of the makeshift firearms used in the Sept. 11 video are unclear, but it’s not the first time developers have encountered armed resistance.

In June 2010, a man called Yang Youde, facing the seizure of his farm in Hubei Province, used fireworks to fend off scores of construction personnel and hired thugs intent on driving him and his family off the property.

Yang used handheld launchers while manning a tower he built specifically to give him a better vantage point, but also crafted a launch cart with multiple tubes, increasing the firepower of his barrages.

Yang used handheld launchers while manning a tower he built specifically to give him a better vantage point, but also crafted a launch cart with multiple tubes, increasing the firepower of his barrages.

Fighting back was preferable to passive resistance (some victims of forced demolition are known to have self-immolated in protest), Yang later told the state-run Beijing News:

“When it comes to me, I was thinking of [committing suicide] too. But I don’t want to die, and at the same time I don’t want to give up my legal rights. As a result I was compelled to bombard the demolition team.”

Callous and dismissive officials haven’t done much to abate the desperation fueled by the forced demolitions. This June, Hua Guojun, a local official in Anhui Province, joked and laughed at a weeping middle-aged woman begging him to stop the workers busy wrecking her public bathhouse.

“Those in the excavators care about money, not lives,” one Chinese netizen wrote in reaction to the video. “They destroy houses and rob the owners of their land. Of course people will fight back with their lives.”