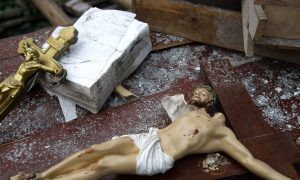 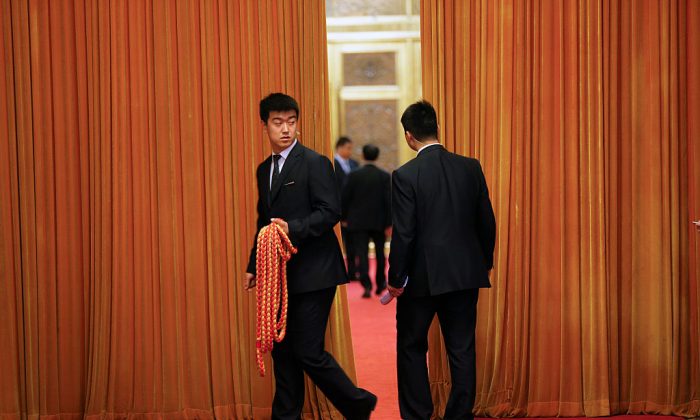 A security agent at the Great Hall of the People in Beijing, China, on April 28, 2016. (Damir Sagolj/Getty Images)
US

Over the course of just three weeks in April, there were four cases involving Chinese espionage against the United States. And facing this threat, the United States has broadened its rules for prosecuting cases that involve national security.

A letter from Deputy Attorney General Sally Q. Yates was allegedly circulated among federal prosecutors in March, which The New York Times claimed to have obtained a copy of. The letter says, “All cases affecting national security, even tangentially, now require coordination and oversight in Washington.”

The New York Times notes this “had always been the intention of the rule,” but the new update “made it explicit.” The letter also allegedly states, “The term ‘national security issue’ is meant to be a broad one.”

The piece doesn’t clarify what has actually been changed, but a closer look at the rules for these cases gives a much clearer picture.

A spokesperson from the Department of Justice told Epoch Times in an email that any official changes to the rules would appear in the U.S. Attorneys’s Manual—and the handbook does show two sections were updated in March 2016.

When the new version of the handbook is compared side-by-side with an archived version from Sept. 14, 2015, it shows the definitions for national security cases were expanded.

The introduction on National Security Cases went from being a single-paragraph description with 137 words in September 2015, to a 364-word description divided into two sections.

It adds ‘internal security’ as part of the definition of national security.

The update mostly just adds additional clarity to what defines a national security case, with the exception of one key point.

Beneath the descriptions, it also adds a paragraph that gives more insight into what’s entailed in the otherwise broad definitions. It says “This includes countering terrorism; combating espionage and economic espionage conducted for the benefit of any foreign government, foreign instrumentality, or foreign agent; enforcing export controls and sanctions; and disrupting cyber threats that are perpetrated by nation states, terrorists, or their agents or proxies.”

‘Other Matters’ of National Security

The next part seems to address what The New York Times said was in the letter, when stating “All cases affecting national security, even tangentially, now require coordination and oversight in Washington.”

The keyword in the letter is actually the “tangentially” part. It applies to the section in the handbook related to definitions of criminal national security cases.

The newly-updated version adds ‘Other Matters that Affect the National Security’ to its list of crimes that qualify as national security cases.

All the same definitions criminal cases related to national security are still in place—but with one broad addition.

The newly updated version adds “Other Matters that Affect the National Security” to its list of crimes that qualify as national security cases.

Under both the new and old versions, U.S. Attorney Generals are required to consult with the Counterintelligence and Export Control Section (CES) at all stages of a case—including before the arrest is made or search warrants are given.

The newly updated version adds another section, stating they’re also required to consult with CES “if there is a reasonable question about whether a particular matter affects the national security.”

It also adds the additional requirement that Attorney Generals need to consult with CES before a plea agreement is filed.

The New York Times piece puts the alleged letter in the context of espionage cases falling through, and claims the new rules are supposed to “prevent such missteps” while not damaging efforts to catch foreign spies.

It lists a small number of cases where people of Chinese ethnicity were charged with crimes related to espionage, and the charges were later dropped after defense lawyers confronted prosecutors with new evidence.

It notes that in regular criminal investigations, the defense lawyers often confront prosecutors with new evidence or preview their arguments before charges are filed. With national security cases, however, they rarely have these conversations because they get worried the suspects will destroy evidence.

Under the clarified version of the rules, the letter allegedly states that if federal prosecutors consult with prosecutors in Washington, who are more experienced in national security cases, it would help “ensure prompt, consistent, and effective responses” on the cases.