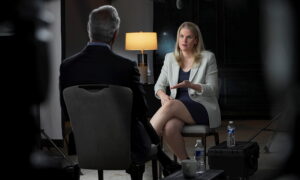 Former Facebook employee and whistleblower Frances Haugen is set to meet with the social network’s oversight board in the coming weeks, the company announced on Monday.

Haugen, a former a product manager on Facebook’s civic misinformation team, on Oct. 3 revealed that she was the individual who who provided the internal documents for a Sept. 14 exposé by The Wall Street Journal that claims Instagram has a “toxic” impact on the self-esteem of young girls. She has accused Facebook of repeatedly putting profit before doing “what was good for the public,” including clamping down on hate speech.

In a Senate subcommittee hearing on Oct. 5, she raised a number of concerns, including charging that the social media platform has had a “destructive impact” on society. She cited ethnic violence in Myanmar and Ethiopia, suggesting that there is a link between Facebook activity and the violence in the regions. The social media platform’s algorithms facilitate hate, Haugen said, and therefore put profit before user safety.

Other concerns included that Facebook is aware that it is presenting young users harmful, eating disorder-related content.

“In light of the serious claims made about Facebook by Ms. Haugen, we have extended an invitation for her to speak to the Board over the coming weeks, which she has accepted,” Facebook’s Oversight Board said in a press release on Monday.

“Board members appreciate the chance to discuss Ms. Haugen’s experiences and gather information that can help push for greater transparency and accountability from Facebook through our case decisions and recommendations.”

I have accepted the invitation to brief the Facebook Oversight Board about what I learned while working there. Facebook has lied to the board repeatedly, and I am looking forward to sharing the truth with them.

In a statement on Twitter, Haugen said she had accepted the company’s invitation to “brief the Facebook Oversight Board about what I learned while working there.”

“Facebook has lied to the board repeatedly, and I am looking forward to sharing the truth with them,” she added.

However, responding immediately after Haugen’s testimony last week, Facebook suggested that Haugen’s credibility was in question, saying she was “a former product manager at Facebook who worked for the company for less than two years, had no direct reports, never attended a decision-point meeting with C-level executives.”

“We don’t agree with her characterization of the many issues she testified about. Despite this, we agree on one thing; it’s time to begin to create standard rules for the internet,” said Lena Pietsch, Facebook’s director of policy communications.

“If we wanted to ignore research, why would we create an industry-leading research program to understand these important issues in the first place? If we didn’t care about fighting harmful content, then why would we employ so many more people dedicated to this than any other company in our space—even ones larger than us?” Zuckerberg wrote on Oct. 5.

The Oversight Board was set up by Facebook to give independent verdicts on a number of content decisions.

“As a Board, we will continue to ask Facebook difficult questions and push the company to commit to greater transparency, accountability, and fairness,” the body said on Monday. “Ultimately, only this can give users the confidence that they are being treated fairly.”