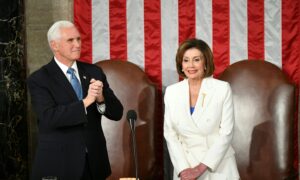 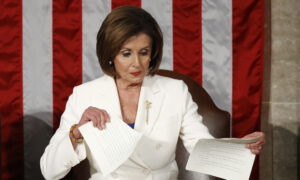 Speaker of the House Rep. Nancy Pelosi (D-Calif.) walks through Statuary Hall to the House Chamber for President Donald Trump's State of the Union address in the Capitol in Washington on Feb. 4, 2020. (Charlotte Cuthbertson/The Epoch Times)
Politics

The office of House Speaker Nancy Pelosi (D-Calif.) requested that Facebook and Twitter take down a video of clips from President Donald Trump’s State of the Union address with shots of her tearing apart a copy of the speech. Both of the social media companies denied her request, citing different reasons.

The video, posted by Trump’s official Twitter account, interspersed clips of Pelosi ripping the papers at the end of the speech with moments of emotion and standing ovations during the speech. “Powerful American stories ripped to shreds by Nancy Pelosi,” the text above the video reads.

The speaker’s argument appears to be that some people may get a false impression that she tore the papers in half repeatedly during the speech and not just once at its conclusion.

“The latest fake video of Speaker Pelosi is deliberately designed to mislead and lie to the American people, and every day that these platforms refuse to take it down is another reminder that they care more about their shareholders’ interests than the public’s interests,” Pelosi’s deputy chief of staff, Drew Hammill, wrote in a Feb. 7 tweet.

Trump campaign spokesman Tim Murtaugh responded, “If Nancy Pelosi fears images of her ripping up the speech, perhaps she shouldn’t have ripped up the speech.”

Facebook said the video doesn’t violate its policies regarding deceptive content because those only pertain to content that shows people saying or doing something they didn’t do, CNBC reported.

Twitter’s new rules against deceptive content are not yet in place, and the company said the video doesn’t violate its current rules.

On Feb. 4, Twitter announced new rules that, in part, say: “You may not deceptively share synthetic or manipulated media that are likely to cause harm. In addition, we may label Tweets containing synthetic and manipulated media to help people understand the media’s authenticity and to provide additional context.”

To determine what media are “synthetic or manipulated,” the company would check “whether the content has been substantially edited in a manner that fundamentally alters its composition, sequence, timing, or framing,” whether there’s “any visual or auditory information (such as new video frames, overdubbed audio, or modified subtitles) that has been added or removed,” and “whether media depicting a real person has been fabricated or simulated.”

Twitter said it will start labeling such content on March 5, asking for “patience” as it “will make errors along the way.”

The company wouldn’t speculate on whether the Pelosi video would be censored under the new rules.

Social media companies have repeatedly tightened their content policies. A 2018 internal Google research document titled “The Good Censor” said that social media companies have over time moved away from honoring the principles of freedom of expression and moved toward censorship. They’ve moved themselves away from descriptors such as “neutral,” “aggregator,” and “platform,” to being better described by words such as “politicized,” “editor,” and “publisher,” said the document leaked to Breitbart.

One way that political preferences of social media companies manifest is through their “hate speech” policies, according to Michael Rectenwald, a former liberal studies professor at New York University and author of “Google Archipelago: The Digital Gulag and the Simulation of Freedom.”

The tech companies have centered their “hate speech” rules on countering ideologies of supremacy, but overlook the perils of ideologies of equality, which have proven far deadlier, he said.

The companies “represent leftism—to themselves and their constituencies—as the default, no-fault political belief system,” he said.

“Hate speech” is a subjective standard impossible to enforce fairly, according to Nadine Strossen, a law professor and former president of the American Civil Liberties Union.

People on the political left are much more likely to call a variety of statements “hateful,” while those on the right tend to call the same statements “offensive, but not hateful,” a 2017 Cato survey found (pdf).