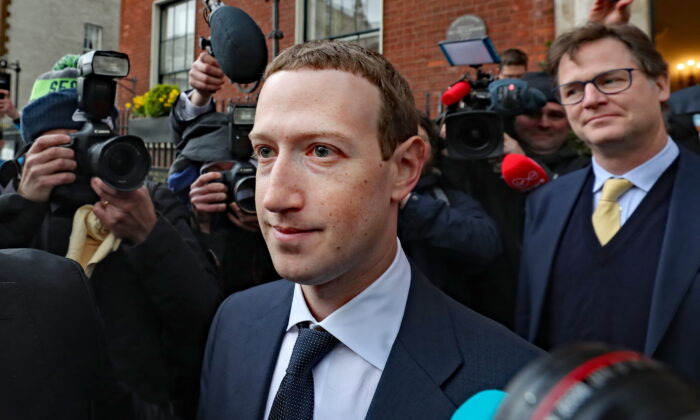 House Republican lawmakers have asked Meta CEO Mark Zuckerberg to preserve communications between Facebook and the FBI, after Zuckerberg said last weekend that he decided to suppress the reach of reports in late 2020 about a laptop belonging to Hunter Biden following messages from the bureau about possible Russian propaganda.

Both Facebook and Twitter reduced the reach or blocked a New York Post report on the younger Biden’s laptop that revealed his extensive business dealings with a Chinese regime-linked company and in other countries. Meta is the parent company of Facebook.

“Shortly before the 2020 presidential election, Facebook suppressed an explosive New York Post article detailing how Hunter Biden used the position and influence of his father, now-President Biden, for personal gain, with the apparent awareness of President Biden,” Rep. Jim Jordan (R-Ohio), the ranking Republican member on the House Judiciary Committee, and 34 other GOP lawmakers said in a letter (pdf) to Zuckerberg, dated Sept. 1.

They referenced the recent interview with podcast host Joe Rogan, when Zuckerberg said the FBI “basically came to us” in 2020 and said that “you should be on high alert. We thought that there was a lot of Russian propaganda in the 2016 election. We have it on notice that, basically, there’s about to be some kind of dump that’s similar to that. So just be vigilant.”

At the time, some former intel officials and Democrats claimed that the story was a Russian disinformation plot, although the laptop’s contents were later corroborated by a Biden associate. That same associate, Tony Bobulinski, received several emails from Biden and confirmed that Joe Biden was the individual referenced as “the big guy” in those messages.

In the wake of Zuckerberg’s FBI comment, Jordan and fellow Rep. James Comer (R-Ky.), the ranking GOP member of the House Oversight and Reform Committee, said they want more details.

“You acknowledged that this official alert from the FBI is what led to Facebook reducing the circulation of the Post’s reporting on its platform, preventing Americans from fully understanding highly relevant allegations about President Biden’s awareness of and involvement in his family’s influence-peddling scheme,” the Republicans’ letter says.

The congressmen added that they want additional information and details regarding the actions Facebook took “to interfere in free and fair election-related public discourse.”

“Furthermore, this letter serves as a formal request to preserve all existing and future records and materials relating to the topics addressed in this letter,” the GOP lawmakers said. “You should construe this preservation notice as an instruction to take all reasonable steps to prevent the destruction or alteration, whether intentionally or negligently, of all documents, communications, and other information, including electronic information and metadata, that are or may be responsive to this congressional inquiry.”

After Zuckerberg’s statement to Rogan, the FBI responded by saying that it gave a general warning to Facebook and other social media firms. That message didn’t include a call to action, the bureau said.

Meta issued a statement on Aug. 26 in a bid to clarify Zuckerberg’s remarks. The FBI shared general warnings about the election and didn’t mention Hunter Biden, the company said.