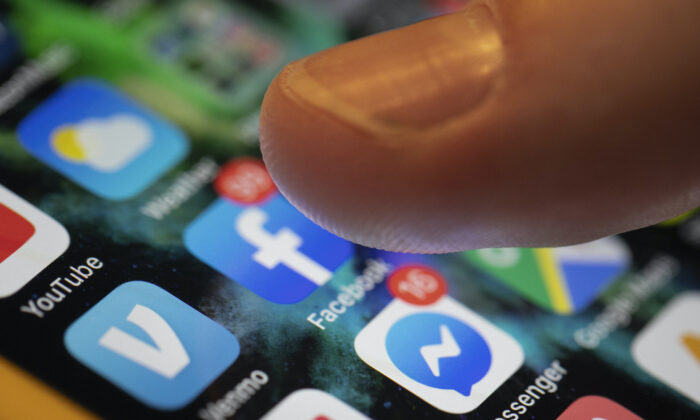 An iPhone displays the apps for Facebook and Messenger in New Orleans on Aug. 11, 2019. (Jenny Kane/AP Photo)
Social Media

Facebook on Feb. 1 rolled out a new security feature that requests users’ permission to let the tech company track their activity, a move that could clash with Apple’s latest privacy update plans.

Beginning Monday, the social media company introduced a test encouraging some users to respond “Allow” or “Don’t Allow” to prompts that pop up when they open the Facebook app on iOS devices, CNBC reported.

The tech company says its prompts will tell users that by allowing it to access their activity, they will receive personalized ads, and will be able to back businesses that rely on ads to reach customers.

It comes as Apple’s Senior Vice President of Software Engineering, Craig Federighi, announced last week that the company’s scheduled privacy update to iOS 14 will allow users to opt in to tracking from third-party app developers, including Facebook.

“Data tracking is more widespread than ever. Learn how Apple’s privacy features help users take control over their data,” a press release said.

“Privacy means peace of mind,” Federighi said. “Our goal is to create technology that keeps people’s information safe and protected. We believe privacy is a fundamental human right, and our teams work every day to embed it in everything we make.”

Apple’s planned update seeks to put its users “in the driver’s seat” in choosing which apps can access personal data and information.

The two companies have clashed over privacy protections for a decade. Last week, Apple CEO Tim Cook fired off a series of thinly veiled shots at Facebook and other social media companies, escalating an online privacy battle pitting the iPhone maker against digital services that depend on tracking people to help sell ads.

“Too many are still asking the question ‘how much can we get away with?’ when we should be asking ‘what are the consequences?’” Cook said at a virtually held international conference on Computers, Privacy, and Data Protection.

“A social dilemma cannot be allowed to become a social catastrophe,” Cook added, referring to a Netflix documentary about technology’s—and especially social media’s—corrosive effects on society. That film took aim squarely at Facebook and how its algorithms manipulate its nearly 3 billion users to get them to look at the ads that generate most of its revenue.

Apple hasn’t yet provided a specific date for its planned privacy control measures that aim to prevent iPhone apps from secretly shadowing people. However, a general timetable released last week suggests that the long-awaited safeguard known as App Tracking Transparency will be part of a software update likely to arrive in late March or some point in April.

After delaying the planned September introduction of the safeguard amid a Facebook-led outcry, Apple had previously said it would come out early this year. Apple released the latest scheduled update as part of Data Privacy Day.

“Technology does not need vast troves of personal data, stitched together across dozens of websites and apps, in order to succeed,” Cook added. “Advertising existed and thrived for decades without it.”