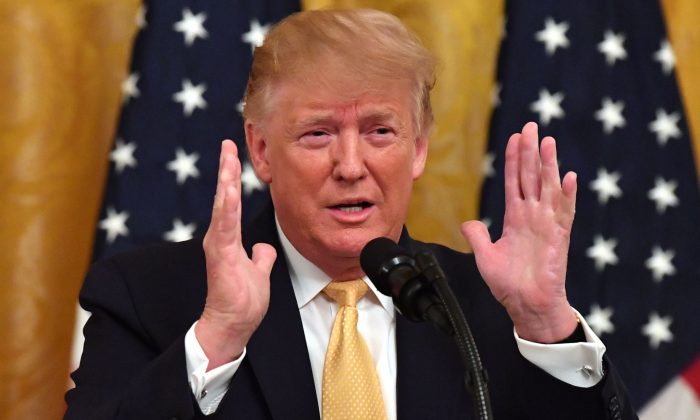 A Facebook post about donations by a local chain of restaurants in Michigan to President Donald Trump has set off a heated debate on social media.

Thirty-year-old insurance agent Doug Chu shared a screenshot of two donations made by Anna’s House, a chain of eight restaurants, on his Facebook page on Aug. 7.

The screenshot of the donation receipts on the Federal Election Commission’s (FEC) website shows Anna’s House made two donations of $2,800 each to Trump’s presidential campaign on April 2.

The FEC website shows one donation made for “General” election type and the other made for the “primary” election type. The FEC receipts also show a third donation of $15,000 made to Trump Victory, a joint fundraising committee.

The debate was set off with Chu sharing his disapproval of the chain’s support for the president. “Anna’s house is canceled,” wrote Chu, who is originally from Singapore, according to his Facebook profile.

The post gathered more than 200 comments over the next two days, prompting written statements from Anna’s House and from the Kent County Republican Party Chair.

Chu did not immediately respond to The Epoch Times’ request for comment.

Supporters of Trump expressed that they would continue visiting Anna’s House whereas those against Trump said they would boycott the chain of restaurants, with some suggesting alternative outlets for a similar menu.

“Well… I guess I won’t be going there! Used to love that place,” wrote one person.

“How dare they tempt me with good food and then turn around and do this,” wrote another.

There were enough expletives and emoticons in the comments, some made lightheartedly, some angrily, and others mockingly.

“Ha… who cares… I eat at plenty (of) establishments that have different political views,” one person commented. “Especially if they make a mean omelet. I guess it’s a free country either way. Maybe I won’t have to wait an hour on Saturdays any more…”

Some people said differences in opinion are everywhere and that linking politics with food is going a bit far.

“If I boycotted every place I disagreed with politically, I would probably eat nowhere,” wrote one person.

Kent County Republican Party Chair Joel Freeman said in a statement that Anna’s House is a popular breakfast joint and people should not create strife over “breaking bread.”

“Treating people with different political viewpoints as enemies to be eliminated is toxic and counterproductive. Anna’s House is a popular locally-owned business that has found success serving delicious breakfasts that everyone can enjoy. It’s too bad that some would prefer division and strife over breaking bread, but that just means there’s more waffles for the rest of us,” he said in a statement to Fox17.

Anna’s House owner Josh Beckett said in a statement released on Thursday that everyone in the United States has the freedom to hold different opinions.

“I am proud to live in a country where we are free to have different opinions and to support a candidate of our choice. At Anna’s House, we employ and serve people of all backgrounds and beliefs, without judgement. Our goal is to treat everyone like family–and in families, there are often differences of opinion. Embracing these differences and respecting each other despite them is what makes our country great. If you are looking for an open, supportive, and accepting place to enjoy a great meal and conversation, Anna’s House is here for you,” he said.

An expert in politics and social media, Prof. Jennifer Stromer-Galley told The Epoch Times in an email that such debates are not new.

“But it’s more visible and more morally charged in our current racially charged political climate,” said Stromer-Galley, who is the Director at the Center for Computational & Data Science, Syracuse University.

“Put another way, after Watergate and the changes in record keeping required by the federal government, journalists and the public have voiced concerns each election cycle about which companies and individuals are donating to political candidates,” she said.

She said social media has changed the landscape a lot. “Because of the reach and spread of Facebook, which reaches roughly 75 percent of Americans, ordinary people and activists can raise further visibility around the issue.

“Social media further promotes a culture of outrage, which amplifies the intensity of emotion some feel around a given issue, in this case, who is giving money to whom,” she said.