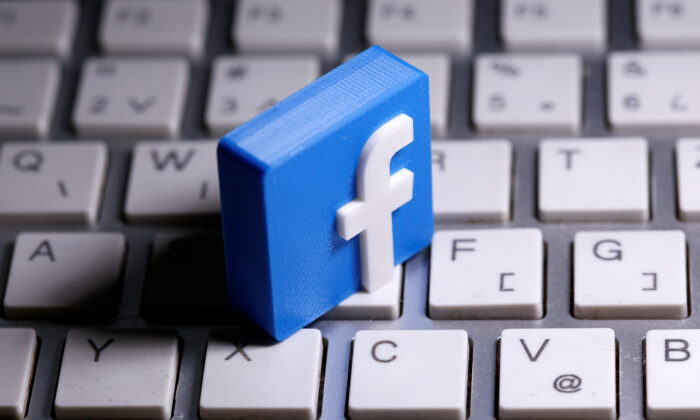 A 3D-printed Facebook logo is seen placed on a keyboard in this illustration taken March 25, 2020. (Dado Ruvic/Illustration)
By Tom Ozimek

Social media giant Facebook has called for comments from the public on former President Donald Trump’s indefinite suspension from the platform, with the input set to inform a decision by an advisory panel on whether Trump will be allowed back on.

Facebook’s Oversight Board, which includes lawyers, current and former journalists, rights advocates, and academics, said in an announcement Friday that people and groups with “valuable perspectives” on Trump’s suspension can submit their comments via an online form by a Feb. 8 deadline. The advisory group has until April to decide on whether to reinstate Trump’s Facebook and Instagram accounts, which the company froze after the Jan. 6 Capitol breach.

On the day that the Capitol was stormed as Congress was gathered to certify the results of the 2020 presidential election, Trump made two posts on Facebook that the company found objectionable and removed, publicly citing Trump’s “use of our platform to incite violent insurrection against a democratically elected government.”

The message continued: “It’s a very tough period of time. There’s never been a time like this, where such a thing happened, where they could take it away from all of us—from me, from you, from our country. This was a fraudulent election, but we can’t play into the hands of these people. We have to have peace. So go home. We love you. You’re very special. You’ve seen what happens. You see the way others are treated that are so bad and so evil. I know how you feel. But go home and go home in peace.”

Facebook said it removed the video for violating its Community Standard on Dangerous Individuals and Organizations under its policy prohibiting praise, support, and representation of events that Facebook designates as “violating.”

The second of Trump’s messages to be banned was a written statement on Facebook: “These are the things and events that happen when a sacred landslide election victory is so unceremoniously viciously stripped away from great patriots who have been badly unfairly treated for so long. Go home with love in peace. Remember this day forever!”

Later, after reviewing Trump’s communications outside the platform, Facebook determined to extend the block indefinitely.

As part of its comment-seeking process on the indefinite suspension, Facebook is looking for input as to whether the lockout “complied with the company’s responsibilities to respect freedom of expression and human rights,” whether it should have taken different measures, and what actions should be taken with respect to Trump’s accounts going forward.

The public comments will be posted online when the board publishes its ruling in the Trump case, according to the company.

Facebook’s Oversight Board is intended as a kind of “supreme court” for the company’s own policy making, with its decisions binding—”they can’t be overruled by CEO Mark Zuckerberg or anyone else at Facebook,” the company said.