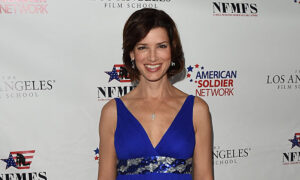 Actor Kevin Sorbo, famous for starring in the “Hercules the Legendary Journeys” fantasy television series, is considering legal action against Facebook after the tech giant deleted his page, twice.

Sorbo had amassed a following of around 550,000 fans on his Facebook page, which the actor said helped him book speaking events and other gigs.

“These guys are taking away my livelihood,” he told The Epoch Times of the ban on Feb. 17 while defending his posts.

Sorbo said his problems on Facebook started after he began posting about masks and questioning the government’s COVID-19 restrictions.

In some posts, he had voiced concerns that big box stores like Target and Costco were deemed essential during lockdowns but not “mom and pop” stores. In others, he said that he had reposted information about COVID based on what some doctors were saying, while questioning how policies might be impacting the younger generation.

“I’m not denying that COVID exists. I’m not denying that it’s contagious,” he said. “But … I hear anywhere between 99.4 to 99.7 percent of people who get it will survive it, you know. We’re making five- and seven-year-old kids walk around with masks on. That’s child abuse to me,” he said. The Centers for Disease Control and Prevention recommends children older than two years old wear masks.

“So I started, you know, asking more and more questions and posting what doctors were saying about it,” Sorbo said.

Soon after, Facebook contacted him to say they would be restricting his posts. “We’re going to shadow ban you now,” he said was the message he received from the tech giant.

“Then all of a sudden, last week, they took me down, just took away the page. And no explanation, no other warning, nothing at all,” he said. He added that a second page he started after the initial ban had just been deleted on Feb. 16.

Sorbo said that he only heard from Facebook why his accounts had been deleted after a spokesperson gave a statement to Fox News in response to the outlet’s report on his deplatforming.

“We removed Kevin Sorbo’s Page for repeatedly sharing debunked claims about the coronavirus or vaccines,” the statement to Fox News read.

The spokesperson also told Fox that it had notified Sorbo’s account twice to say that it had 48 hours to remove posts that Facebook considered to be promoting alleged misinformation, as per its policy. They said they deleted Sorbo’s page because there had been no action. It’s unclear which of Sorbo’s posts violated Facebook’s policies.

But Sorbo has denied Facebook’s account of the situation, saying, “Facebook never asked me to take down whatever COVID posts they are talking about. I would have, reluctantly, taken the posts down if they had. Liars. Such a shock.”

He said he had made several attempts to seek clarity from Facebook about their decision to delete his page but received no answer.

“They can say whatever they want. That’s the problem,” he added.

Sorbo also voiced to The Epoch Times his concern that discussion on important health topics like mandatory mask-wearing is being shut down by tech giants on digital public squares while the government is exerting so much control over people’s lives.

“This is fascism and Marxism at its at its finest, you know, beginning to really get rocking and rolling in America and around the world,” he said. “It just blows my mind that we’re allowing these people to control our lives like this.”

Sorbo also accused big tech platforms of a left-leaning bias, citing his observations that the social media accounts of people on the left were never sanctioned for “angry” or inappropriate remarks.

“Why is it okay for them to keep the angry comments from the left?” Sorbo asked. “I mean, the hypocrisy is just so unbelievably blatant.”

As an example, he pointed to Disney firing “Mandalorian” actress Gina Corano for posts she had made online. Meanwhile, he said, Jack Morrissey, a co-producer for Disney’s “Beauty and the Beast,” was not banned by Twitter for writing “MAGA kids go screaming, hats first into the woodchipper” on a post accompanied by an illustration depicting a bloody scene from “Fargo” in which a dead person’s body is fed through a wood chipper.

Morrissey apologized for that tweet, telling The Wrap, “It was something that I did not give any thought to. It was just a fast, profoundly stupid tweet. … I would throw my phone into the ocean before doing that again.”

Just so we’re all clear, he still has his job at Disney pic.twitter.com/TTdeAmpROF