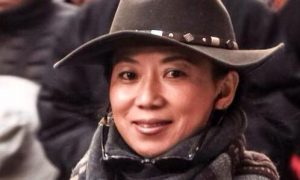 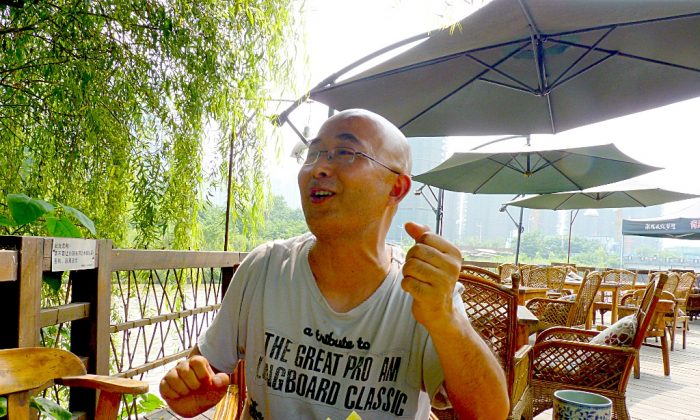 Liao Yiwu, a Chinese writer who has been based in Berlin for the last four years, was locked out of his Facebook account on Dec. 30, after repeatedly posting photographs of a nude or mostly-nude protester. The account and all its posts were also temporarily inaccessible to other users, giving the appearance of their being deleted; it was later restored, but remains  inaccessible to its owner.

“I’ve returned to China,” Liao said in an email.

The images that Facebook said led to Liao’s punishment were of the Chinese activist Meng Huang, who ran through the streets of Stockholm naked on Dec. 10, as a gesture of support for the imprisoned Chinese writer Liu Xiaobo.

“These kind of photographs, of naked protest, are common in the West. Like Pussy Riot in Russia, and other musicians and social activists—they often use this method of protest,” Liao said in a telephone interview on Tuesday.

“I wrote this clearly on Facebook, but they deleted it, deleted it many times.”

Personal Privacy Is Eroding as Consent Policies of Google and Facebook Evoke ‘Fantasy World’
Is It Time for Facebook to Unbind its Videos From its News Feed?

Liao shared Facebook’s note to him explaining the move. It said “Your recent posts violate Facebook’s content policies, so we have temporarily locked your right to use this function.” It is unclear when Facebook will allow Liao to access his account again.

One of Liao’s recent posts pointed out that the Chinese-language notice by Facebook prohibits “nude photos,” while the English-language version only prohibits pornography.

The post also contained Liao’s back-and-forth exchange with Facebook about the photographs; it vanished, too, and is only available in cache form.

On Twitter Liao wrote: “I already made my position clear to the Facebook news censorship officials: if you delete it, I’ll post it back, all the way until my account is deleted. I have absolutely no interest in so-called pornographic and violent pictures. I’m just a liberal writer defending freedom of speech and freedom of the press.”

A Facebook spokesman did not immediately respond to queries except to clarify whether Liao alleged that his account was deleted without forewarning. A complete response by Facebook is expected.

The company’s stance on sensitive Chinese political content is being scrutinized of late, in particular after overtures by Facebook’s CEO, Mark Zuckerberg, about potential access to the China market. Zuckerberg appeared at a major Chinese university speaking broken Mandarin in October, part of a publicity tour, and the country’s top internet censorship official, Lu Wei, visited the company’s offices recently. The Chinese writer Tsering Woeser also recently reported that Facebook deleted one of her posts featuring video of a Tibetan Buddhist monk’s self-immolation in Sichuan Province.

The immediacy and harshness with which Liao Yiwu was dealt, especially after he ceased posting the initial, fully-naked photos, stands in contrast to the comparatively lenient treatment afforded other users. The user page of Pussy Riot, the Russian band, for example, contains numerous images of naked females and even explicit photographs of sexual activity. If Facebook had taken action against those users, the images would not have been visible.

It’s possible that the other users did not have their risqué photographs brought to the attention of Facebook officials, while Liao’s posts are watched closely by pro-Beijing internet users. This was a proposition raised by Yaxue Cao, a translator and writer based in Washington, D.C., on Twitter. “This method is getting very close to Weibo,” she said, referring to the tight controls on content and political speech on the popular Chinese social media website.

In a telephone interview with Epoch Times, Liao said that he felt Facebook was adopting the tactics of censorship seen in China. “They censor these protest pictures, immolation pictures, using the means of censorship that the Communist Party uses. They have anonymous reporting procedures, make decisions secretly, and don’t give you a chance to explain or discuss it.”

He continued: “Even though it seems like an open social media platform, it’s actually a dictatorship behind the scenes. They have an old Soviet mentality when it comes to censorship.”

Separately, viewers would no doubt have been intrigued by the use of a pop art-like rendition of the face of Mao Zedong, the first Chinese communist dictator, digitally affixed over the genitals of Meng Huang.

The Chinese word for describing Mao as lustful (se) overlaps with the word for pornographic (seqing). “Mao killed so many people and was a sex maniac. He killed more people than Hitler.”

Liao also pointed out that Meng Huang was protesting against the awarding of the Nobel Prize for Literature to the Chinese writer Mo Yan, whom many consider a government stooge. “Mo Yan is a worshiper of Mao, so we used this photo. It’s a joke, like saying your prize is like my genitalia.”

Liao added: “I think this is quite worthy of our admiration. If every Chinese person did that, the dictatorship would be finished.”