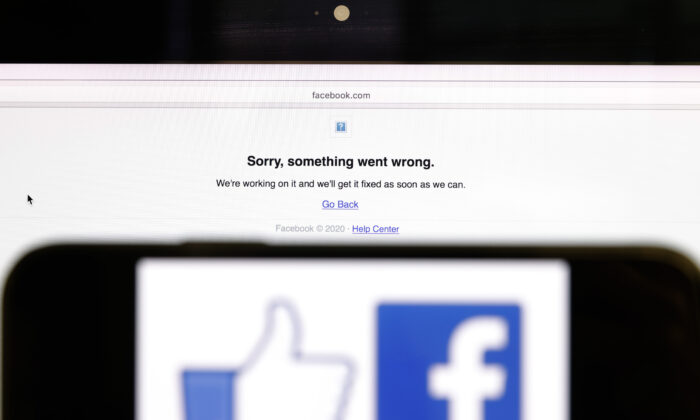 In this photo illustration, the Facebook logo is displayed next to a screen indicating a problem in San Anselmo, Calif., on Oct. 4, 2021. (Justin Sullivan/Getty Images)
Media & Big Tech

Facebook’s Oversight Board offered strong words in a quarterly report released Thursday that called out the company for not revealing information about its new XCheck program for VIP users, designed to better protect celebrities, journalists, and human rights activists.

The board, developed in the aftermath of the Jan. 6 Capitol protest that led to Facebook’s ban on then-President Donald Trump, condemned the social media provider for its failure to disclose the new development when it was asked to investigate whether the former president could return to the platform.

“When Facebook referred the case related to former U.S. President Trump to the Board, it did not mention the cross-check system,” the report noted.

Today we are releasing our first transparency reports which provide details on cases submitted to the Board, as well as our decisions and recommendations to Facebook.

Our key finding: Facebook needs to commit to greater transparency and to treat users fairly.

“Given that the referral included a specific policy question about account-level enforcement for political leaders, many of whom the Board believes were covered by cross-check, this omission is not acceptable,” the board added.

The board’s significant workload, they argued, should have led to more information concerning the pending program. The oversight group has “taken on 20 important cases and issued 17 decisions covering topics from hate speech to COVID-19 misinformation. We’ve received around 10,000 public comments from people across the world and made more than 75 recommendations to Facebook,” according to the group’s statement on Thursday.

The XCheck development was introduced last week as Facebook announced updates to its harassment policy to protect public figures, journalists, and activists from harmful content and attacks, according to a new statement from the social media giant.

The changes followed the recent congressional testimony of Facebook whistleblower Frances Haugen, who shared concerns about the company’s practices.

The company’s new policy is designed to better protect users concerned about bullying and harassment on the platform.